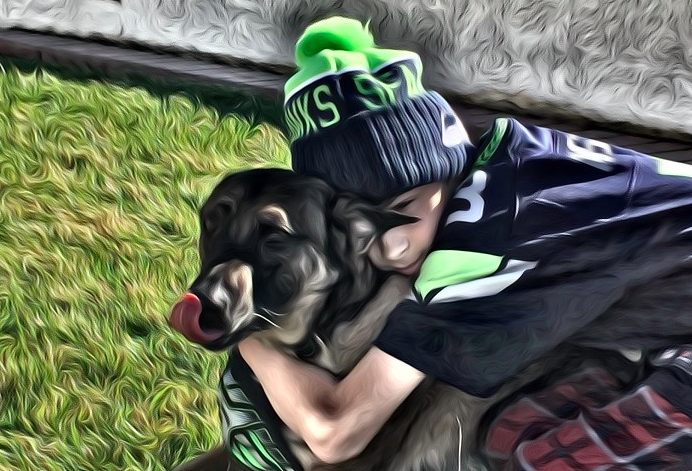 A photo of a boy and his dog. The two are tangled in an embrace. To the untrained eye, this looks like a sweet moment illustrating the immense love and adoration shared between the two. But to those familiar with body language and dog behavior, this could look like an accident waiting to happen.

I’ve seen it all too many times. Comments plague the internet and social media picking apart photos of kids and dogs, heralding brutal critique and pointing out signs that the dog is stressed and about to bite.

But is it really?

Don’t Judge What You Don’t Know

There is a big difference between passing judgement and educating. One is helpful, and the other counterproductive.

No longer can we post a photo that is endearing to us without questioning what aspect of the picture can be dissected and taken out of context by people who don’t know the whole story.

I don’t dare post the photo I took of my nephew and my dog. After all, to anyone who wasn’t there, her body posture could indicate that she was stressed. She’s licking her lips, her ears slicked back and her brow furrowed. He is wrapped around her in an embrace – a big no no in the dog world. But what you can’t tell from the picture is that he is her boy. She follows him everywhere, and when he releases his embrace, she slams her head under his arm, forcing the hug to continue. In fact, any stress she is exuding is from my presence, from the idea that I’ll likely ask her to leave her boy, to load up in the truck, and to abandon the hug that she so persistently begged for the entire afternoon.  What you can’t tell from the photo is that the two are inseparable… that she solicits that affection from him constantly….to the point of being downright annoying. She isn’t stressed. She isn’t worried. She isn’t about to bite.  But the internet know-it-alls will have you believing differently.

Here are some other examples:

A photo I posted of my dog learning a jump he was unfamiliar with was met with a barrage of remarks, commenting on his poor form. But what everyone doesn’t know is that he had tried and failed the jump several times prior. What people don’t see in that snapshot is the surprise and excitement we had when he finally cleared the jump for the first time. It was a moment of pride and accomplishment captured beautifully by the photographer at the most opportune moment. And what they don’t know is that he had perfect form the second and third time he cleared the jump. Instead, they focused on the snapshot, the moment in time. And they make assumptions about our training – something they know nothing about.

Or a video of a dog performing a series of very advanced behaviors that floated around the Internet. His performance is berated. But what people don’t know is the specifications of the sport he competes in. They don’t see the long hours his handler put into his dogs and the hard work that has so obviously paid off. They don’t see the blood, sweat, tears, and love he poured into his training, and they don’t understand the mountains he moved to get to where he was. Because those two minutes don’t align with their own training and philosophy, they belittle and berate him.

Cyber bullying at its best. And animal lovers tend to be some of the worst offenders.

Sure, it can be easy to judge from the comfort of your couch. It can be easy to pick apart a snapshot that captures the best or worst in a training program. But without knowing the entire story, passing judgement becomes not only unwarranted, but irresponsible.

If you can’t say something nice….

To quote Thumper from Disney’s “Bambi”, “If you can’t say somethin’ nice, don’t say nothin’ at all.” Well said, Thumper.

As I get older, I often find myself wondering if I was the only one who was taught that old adage. In grade school, it was said all the time by teachers and students alike. I wonder if the constant repetition in that sing-song tone, reminiscent of old musty classrooms and sitting cross legged on scratchy low pile carpet never sank in with others as it did me.

Now, I’m not perfect – that’s for sure. I try my best not to judge, but sometimes I get sucked in. It happens. But there is never a time I’m glad I did it. When all is said and done, I never feel empowered or better for tearing someone else down. So while I may fail at times, I try my best not to form opinions on things I am not thoroughly informed on, to give people the benefit of the doubt, and most importantly to act with kindness.

Animal lovers tend to be some of the worst when it comes to passing judgement and cyber bullying. I propose that before focusing so much attention on changing the behavior of the dogs we train, we must first adjust our own behavior to be kind and supportive towards one another. Maybe if we do, we will stop seeing those awful memes declaring how much people suck and what horrible trainers they are. Maybe we can stop alienating one another and instead, start learning from each other.

Next time you see a dog training photo, video, or post and you want to disagree or criticize, I’d urge you to ask yourself these questions before you do:

Instead of jumping to conclusions, if a photo or video has piqued your interest or emotionally triggered you in some way, why not seek to understand first instead of passing judgement and being critical? Ask questions and learn why the dog has bad form or why the dog is licking its lips as the boy wraps his arms around her. By learning from one another as opposed to tearing each other down, we can avoid pointless controversy and instead contribute toward our collective goals and passion: to love and train our K9s well.

After all, it’s prudent advice we received all those years back from Thumper the rabbit.

“If you can’t say somethin’ nice, don’t say nothin’ at all.”

3 replies to "A Snapshot in Time: Life lessons learned from Disney"