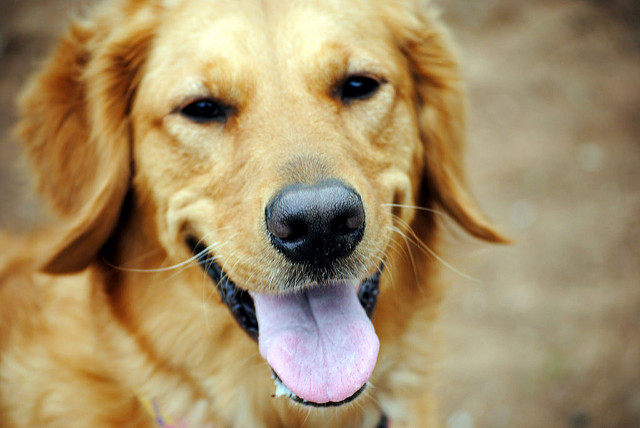 The dog bounced in place, body quaking with excitement, invisible springs attached to his four legs which regularly launched him straight up until his nose met hers.

His owner giggled to herself and then said, “Alright, alright already. I’m getting the leash as quickly as I can!”

The dog bounded and danced as his owner fumbled to retrieve the leash from the closet, her dog’s massive body occasionally colliding with her arm, knocking the leash from her hands as it did.

Finally, leash in hand, she turned to face the dog, ready to tackle the seemingly impossible job of attaching the lead to the collar.

The dog wiggled and squirmed, and as she grabbed his collar, he rolled onto his back, making the task of attaching the leash even more daunting. She burst into a fit of laughter in response to the dog’s antics, giving him a good belly rub and then asking politely for him to stand so she could make the attempt again.

After some amount of fumbling, the leash was on, and in an instant the dog was out the door, dragging his owner behind him as he raced to excitedly sniff the nearest tree.

As I watched the scene unfold, I couldn’t help but smile. The two were obviously head over heels for one another, and the dog’s enthusiasm for life was catching.

“He’s the happiest dog I know,” I told my friend as I recounted the day’s events, revisiting my training session with the boisterous golden retriever who found everything in his life to be THE…MOST….AMAZING….THING…..EVER.

“So what’s the problem?” she inquired. She’s used to the fact that I work primarily with dogs who have serious aggression issues or dogs being trained for work.

“That IS the problem,” I laughed, serious in my statement but finding humor in the situation nonetheless.

The dog had such a zest for life and was so boisterous and excited about EVERYTHING that he became impatient. And as his enthusiasm was catching, his impatience was rewarded….over and over again.

He’s excited and jumps, his owner hurries to get his leash.

He’s so over stimulated he can’t sit still and flops on his back….his owner gives him a belly rub.

He darts out the door, pulling to the nearest tree….his owner follows his lead.

But inevitably, his zest for life and reinforced impatience is not met with the same adoration from others as it is from his owner. What is tolerable (and even cute) for her translates into bad manners around other people. Jumping is rude, and pulling is uncomfortable. And as his owner now attempts to restrain him, holding tight and preventing that which she had so willingly and so overtly rewarded in the past, he gets frustrated. And as his excitement turns to frustration, an entire slew of behavioral problems emerge, including a bad case leash aggression.

I stared blankly at my computer screen. I knew I needed to write another article. My editor was leaving town and I was on a deadline to get a blog post to her before she left. My brain turned over the events from the week, replaying my training scenarios and trying to come up with something interesting to write about.

I had hit a brick wall.

My thoughts raced to the last few posts I made, to some training videos I watched, and back to my own training programs that I had been working throughout the week.

I was stuck, and I couldn’t focus.

As I tried to think of a topic, tried desperately to come up with something I wanted to talk about, my fingers drifted down to my mouse, and I began scrolling aimlessly about the web.

I popped open Facebook and got lost in the sea of newsfeeds, the latest training videos, and video of tortoises attacking blueberries (yep, it’s adorable – look it up). Finally, I resigned myself to the fact that no inspiration was going to strike, so I dove head first into social media, alternating between the brightly lit screen of my computer, and the latest crime drama playing out on the TV on the other side of the room.

Like the dog in the story, who was repeatedly rewarded for impatience, I drifted off, losing focus and reinforcing my own loss of attention with social media and mindless TV.

Are You Reinforcing Impatience?

Whether it’s with our dogs, or in our own lives, we tend to have a huge tendency to reinforce impatience, rewarding and perpetuating it inadvertently as we do. 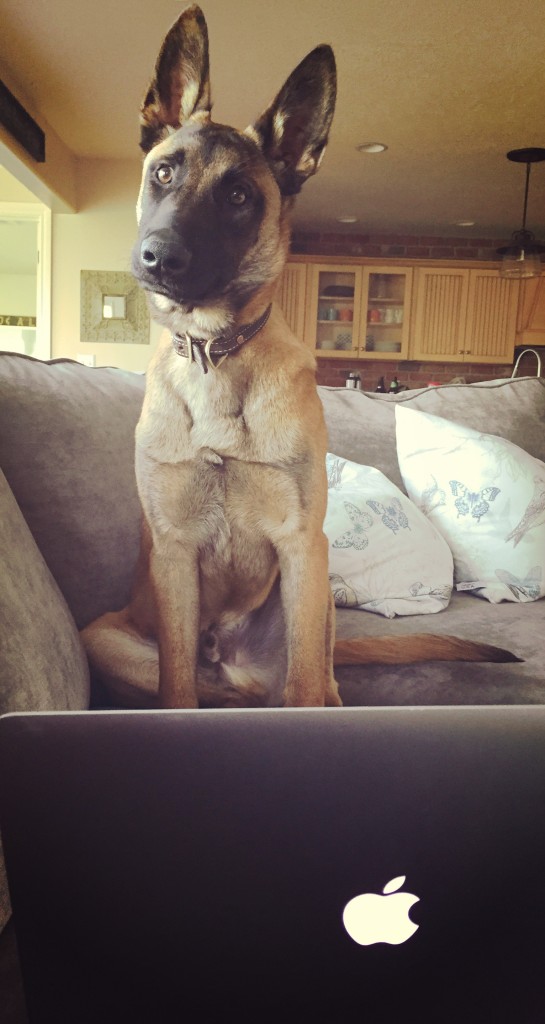 In our dogs, over-excitement is cute, wiggling butts are adorable, and jumping up is no big deal….most of the time. But at some point, that excited energy becomes undesirable. Perhaps jumping on you is okay, but jumping on a neighbor is “bad manners”. Perhaps dragging you down the road for a good sniff doesn’t bother you….until your shoulder is sore or you’ve landed yourself square on the pavement from a quick pull in the wrong direction. And perhaps squirming when a collar is attached is cute…funny even. Until you’ve had a bad day at work or your schedule is tight and you just need to go. Then, the cuteness seems to fade, leaving your dog sunk in his old routine, but being met with a new and uncomfortable response.

Or how about in your own life? Social media streams are fun, mindless entertainment that helps us stay connected by never really being connected. It’s all fun and games until you slack on your work because you got stuck in the latest debate about balanced dog trainers. Television is an awesome way to decompress after a long day, until you replace healthy habits like exercising and at-home cooking with mind numbing shows. And cell phones are crucial, until you can’t focus on a friend or family member for longer than 5 minutes without checking your messages.

Rewarding impatience and lack of focus can seem fun….until it’s not.

Focus is a Muscle

For a moment, let’s think of our focus as a muscle. This can be applicable to our dogs and to ourselves. When we repeatedly reward our dogs for a lack of focus, for impatience, or for over excitement, our dogs lose the ability to focus. Only after the muscle is worked, exercised, and strength is built back up can we reap the benefits of hard work done.

Same can be said for us. As we regularly numb our minds, our focus “muscles” become weak. We haven’t exercised them, so it becomes tricky to rely on them to get anything done. When those muscles become doughy from lack of exercise and use, and all of the sudden we call on them to do some pretty heavy lifting, we are met with an injury in the form of frustration and irritation.

Our brain is “inherently lazy”, writes Tara Swart, a senior lecturer at MIT, in her book Neuroscience for Leadership, and will always “choose the most energy efficient path” if we let it.

The same can be said for our dogs. When we create a habit in our dogs around impatience, and strengthen it through reinforcement, the neural pathway becomes deeply embedded and hard to change. The dog’s brain becomes lazy, choosing the simplest path via the existing neural pathways already in place. As a result, the focus “muscle” becomes weak and behavior change is more difficult to come by.

How to Build your Focus Muscles 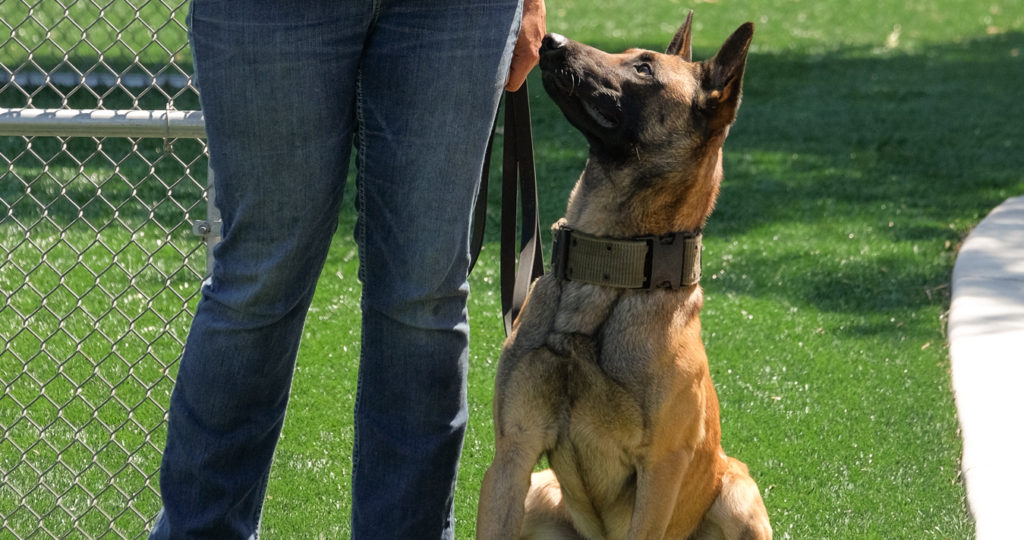 In both dog training and in our own lives, impatience abounds. Focus muscles are regularly neglected, and it can be tricky to get them back after they’ve gotten out of shape.

Now, I’m not saying your dog can never be excited. And I for sure am not saying never to use social media or watch TV. Instead, choose to be in control of how much you are consuming and how you are stimulating yourself. Don’t just act on impulse, but act with intention, and empower your dog to do the same. It’s AWESOME for your dog to be excited in things like obedience, or when you are having a good and productive game of tug. And in your life, it’s great if you can decompress with your favorite show and stay connected on social media. Just don’t make it a way of life. And if you find your focus muscles getting weak, take some time to re-evaluate and put a plan in action to build them back up.

Now if you’ll excuse me, I’m going to get off my computer and work on my focus muscles. And later, Sweet Baby Shank, my little riot dog is going to work his too!

Read more about building new neural pathways as we get older HERE.

4 replies to "Act with Intention: Building Focus in our Dogs, and in Ourselves"