It seems that the more dog training evolves, the more buzzwords start floating around the Internet.

Trainers and textbooks coin new and sexy terms to explain their dog’s behavior, and handlers latch on to new concepts as dog training gets more and more progressive.

After a particularly controversial article I wrote on the reliance of academics in dog training and the use of fancy terminology, most would be surprised to learn that I’m all for the use of jargon and buzzwords……IF it makes us more effective and efficient. Where jargon starts to rub me wrong, is when you have to spend hours reciting a dog training dictionary just to be able to teach a lesson. In those cases, I think you should probably choose more accessible words. But hey, that’s just me.

Anyhow, sometimes it seems a bit of lingo takes hold and in no time flat, I’m left seeing article after article and course after course flooding dog training communities, centered upon these new and “progressive” buzzwords.

One of those buzzwords, which happens to be flooding my feed at this very moment is “Engagement”.

Now listen. Yes, I just put out a course on the topic. And yes, it’s something I feel strongly every dog owner should work on. And yes I USE the word “engagement” – like I said, sometimes training jargon can be effective.

But here’s the thing.

As I watch this concept fly around the Internet at lightning speed, and as I watch trainers and handlers post videos of their engagement work, I’ve come to realize one very important fact.

In fact, more often than not, engagement is confused with a wide variety of other behaviors.

So I thought I’d take a moment to clarify.

Here are a few things engagement is NOT…

So what is engagement?

I suppose every trainer has a different idea as to what engagement really is. But to me, the concept of engagement is a simple one.

An engaged dog is exactly that…engaged.

They are committed, constantly PUSHING for the training that is about to occur. An engaged dog doesn’t want the game to end. They are engaged with YOU because through you, fun happens. (This is important so take note.) 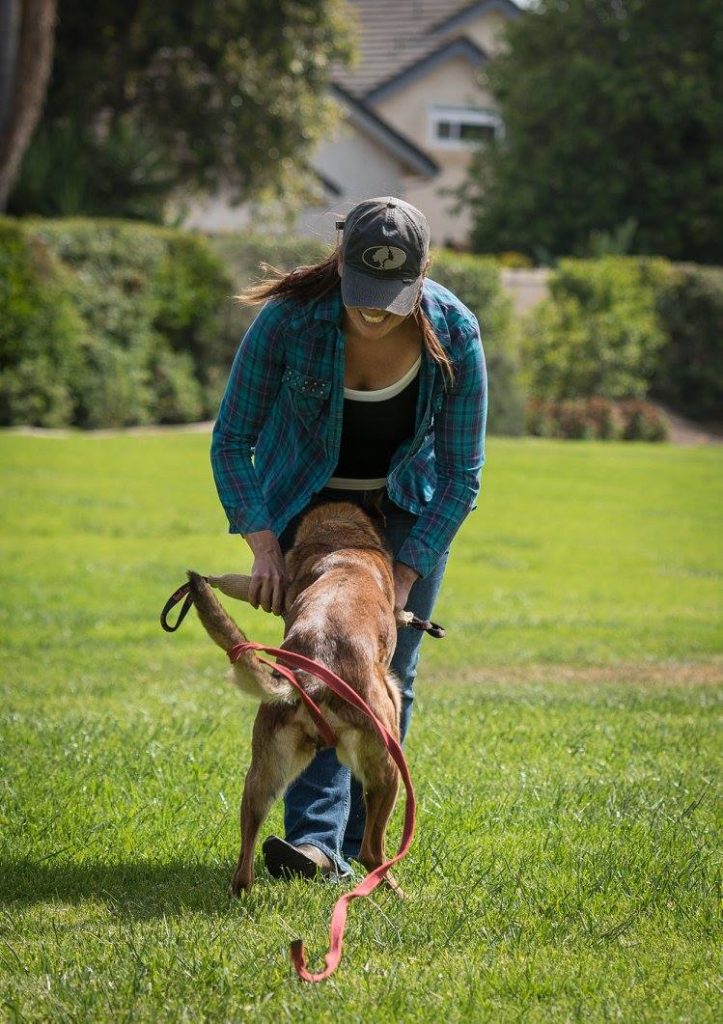 An engaged dog isn’t fixated on their toy or another reward, losing “engagement” the moment they’ve won their prize or the moment the reward is off the table.

They will win a toy and immediately bring it back for more play. They won’t check out with their prize and retreat to a corner of the yard to enjoy it. They want to play with YOU…because let’s face it, you are FUN!

An engaged dog will push you for training to happen. He doesn’t want to engage with his environment. Good smells, people, other dogs, and whatever other distractions are present disappear as soon as real engagement happens. You become your dog’s world. (And let me tell you, you’d better do something with that power. If you become your dog’s world, and that world is boring, you’ll lose engagement more quickly than you got it.)

A motivated and engaged dog MAY bark out of excitement. Sometimes it’s a side effect. And sometimes people will teach their dog to bark as a precursor to engagement. But a barking dog isn’t always an engaged dog. And in fact, while it works for some, barking is NOT something I personally like to use in my engagement work as I’d rather my dog hang on to his energy for the training that’s about to happen.

Most importantly, an engaged dog doesn’t have to repeatedly be asked to engage. He will PUSH you to engage with him. Not the other way around. So if you are constantly amping your dog, revving him up, and always asking for engagement, you might want to go back to the drawing board.

Most of the time, my dog Shank is an engaged dog (trust me, he wasn’t always that way). In fact, we regularly get scolded at training because he has TOO MUCH focus and engagement with me.

Here’s how it looks.

When I get out of my truck (after he airs which is part of our routine), he is immediately staring up at me. I don’t ask for this. He offers it. As we walk to the field, unless given a formal command, he at times will spin around, cutting me off and walking backward, pushing me to play.

When we get to the field, he asks with his eyes and his body “What’s next?!”

The environment doesn’t exist when we are working. He rarely tunes me out (unless I ask too much of him which I’ve been known to do at times – hey, I’m only human!)

When we walk off the field, he tries everything in his power to get the training to continue. He pushes me to keep going. Begging me for just one more round.

My other dog, however, is NOT an engaged dog. His environment is better than me. He hasn’t fully learned the games yet so I find myself regularly competing with the world for his attention. He likes to play with me, but there are so many things that he finds more appealing.

He is a work in progress. He is learning. And he is getting better every day. We have a road ahead of us. But we will get there.

Now, I can’t tell you step by step how to get an engaged dog in this blog alone. But I can offer you a jumping off point.

Simply reward your dog when they offer engagement. Give them a treat or toy when they push you to play or train. Capture the moments they choose you over their environment and celebrate them. And be FUN. Your dog and his engagement will thank you!

12 replies to "Are You Building Engagement or Missing the Mark?"