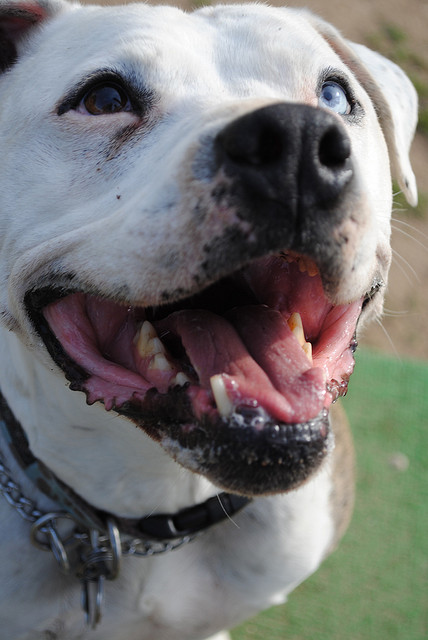 “What commands does she know?”

The woman gazed at me, a thick bulldog mix resting at her feet.

This was always one of the first questions I asked when meeting a new pup, and inevitably I’d be met with a variety of responses, most to include “Sit”, “Down”, and “Stay”. This instance was no different.

As she recited the basic commands she had worked on with her last trainer, it was clear that she was quite proud of herself. She grinned as she told me all of the work she had done, her face glowing as she added that her dog could also “Shake”. But her contentment began to vanish as I uttered my next request.

Her proud demeanor was instantly replaced with insecurity as she stood up from the couch and walked to the middle of the living room.

As she moved, the blocky Bully stood, meeting her owner with instant and feverish tail wags and a massive Bully grin.

Pretending she had a treat in her hand, the woman asked for her first command.

“Sit!” she requested, in a sing-song tone.

The dog complied, barely able to sit still as her bottom half danced uncontrollably with every wag.

The moment the dog complied with the command, her owner gave her a quick pat and held out her empty hands, showing her cards and effectively letting her dog know there was no good reason for her continue to participate.

Despite the fact that she had revealed her secret, the woman pretended to have a treat a second time and lowered her hand to the ground, asking the dog to “lay down”. The dog grinned up at her but failed to take the position. Instead, she stared adoringly up at her faltering owner and was shortly thereafter met with some good ear scratches as the woman realized the dog was not going to take the position.

She stuttered as I watched her work the dog, her nerves getting the better of her and her insecurity doubling when her dog failed to lay down.

“I should probably have treats,” she said, her voice wavering. “We always do this with treats.”

I looked on as she grabbed a dog biscuit from a nearby box and asked for the command again. The reward in her sights, the dog instantly took the position for which she was rewarded with a large cookie that she gulped down as if it were nothing more than the air she breathed. She then popped up and out of the position as her owner fished for another cookie from the box.

I hate to break it to you, but this is something you’ve taught. Or at least something you’ve reinforced. In fact, food is one of the most effective tools for training dogs – you just might not be using it right.

Why? Because YOU are too predictable.

Let’s face it, if every time your dog sits, you give them a single biscuit from a familiar box, what’s to keep them sitting for any duration of time? Of course their butt will instantly pop out of the sit once they’ve been rewarded. Why shouldn’t it? What have you done to teach them to be patient?

Sure, you could approach this by dangling the treat in front of them, by drawing out the time before the reward is issued, thereby making them wait, filled with ever mounting anticipation for the reward that will surely come.

But does that actually promote patience? You can bet the instant that dog gets what he’s after, his butt will pop off the ground, and you’ll be back at square one.

Is your dog outsmarting you?

Dogs are smart. On a regular day, I’d venture to say my dog outsmarts me at least once. And to be frank, I think I’m pretty fluent at speaking dog. Imagine how many times the average dog outsmarts the average owner who doesn’t necessarily speak dog all that well.

When we find ourselves rewarding the same behavior in the same manner day in and day out, our dog starts to predict our action. Good for establishing a common language, for teaching our pup what words mean and that good behavior = good rewards. But not so good when our rewards become so predictable that they end up predicating unwanted behavior.

Think about it. By giving your dog a single biscuit day in and day out every time he sits, you are becoming predictable. When you become predictable, your dog starts to make decisions on his own. Now, because you are predictable, he can start making decisions based on your future behavior.

If he knows what reward to expect, he can decide things like:

If there are other interesting things going on, he can do the bare minimum to get the reward and then instantly be off engaging with whatever interests him at that moment.

Here is another, more relatable example:

Let’s look at your common employee in a retail store. Or better yet, let’s look at my direct experience when I managed a high end chain of pet hotels.

Employees at the pet hotel were given an incentive for arriving to work on time. If they were on time consistently for 30 days and only had 2 late clock-ins, they would be given lunch on the company – something that seemed appealing but never really trumped those extra 10 minutes of sleep for most. For those who did find the incentive valuable enough, or for those who were naturally on time, as soon as the reward was achieved, it seemed as though they’d instantly be late. They got their reward, and now there was no immediate incentive to be on time. 10 extra minutes of sleep….here they come!

You can bet that attendance would be up, and tardiness would be down. Why? Because the schedule is unpredictable, but the promise of something amazing is always there.

Why are we so boring with our dogs?

What makes you so boring to your dog? Why do you feel the need to do the same exercise, day in and day out, with the same outcome?

How to keep ‘em guessing:

The bully in the story suffered from one ailment: a predictable owner. She knew that if she held out long enough, her mom would get a treat to entice her to behave. She knew what the treat was (it was always the same, and after all, she WATCHED her owner retrieve it from the box), and she knew that it was “one and done”. For that reason, she easily made the decision as to whether or not her reward was worth the effort. And when she did agree to behave, she knew the exercise was over the moment the reward was achieved.

In training, while consistency and predictability are key in giving our words meaning (i.e. “Sit” = GOOD), to achieve peak performance, our rewards can’t become predictable or boring. We have to keep our dogs guessing. And we have to keep the promise of “GREAT” dangling in front of them. If we can accomplish that, we can achieve levels of focus and engagement that we once thought were inconceivable.

Quit letting your dog outsmart you…… as much as possible! And quit being boring and predictable. Your dog, and his engagement, will thank you!

Keep an eye out for our upcoming course where we will deep dive into the use and application of rewards. Learn how to select the appropriate reward for different phases of training, and how best to implement that reward for maximum engagement.

5 replies to "Does Your Dog Think You’re Boring?"