I sat in the small room, 2 Former Navy SEALs standing in front of me, a number of weapons adorning the dark green wall behind them. 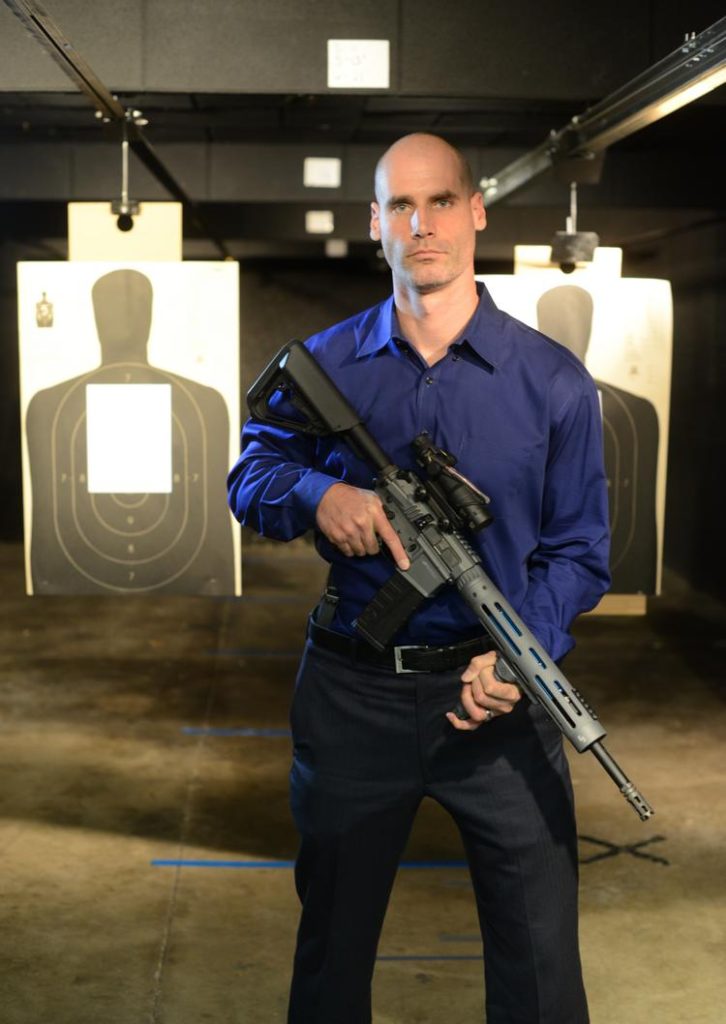 During this impromptu meeting, where I was literally snatched off of the field while dog training and brought to the office to discuss the future direction the company was taking, the Socratic method was in full effect, both men consistently asking me questions to help drive home their points.

My palms were sweaty and my voice trembled. I smelled of cut grass and dog, salty sweat coating my face and arms, my yoga pants covered in dog hair as I tried desperately to hide my discomfort.  It seemed only fitting that THIS was how I was dressed for an important business meeting.

I wasn’t prepared, and if you’ve ever met my colleague Larry (see photo), you’d understand why he used to make me nervous (he doesn’t anymore…but he used to). Standing over 6ft tall, and with a deep and stoic voice that gives no clue as to what he really thinks or feels, Larry is very hard to read unless you’ve really gotten to know him.

My mind instantly tuned out, shifting focus to the dirt that I was now tracking into the office, and the dogs who were out playing in the yard.  If you know me, you know I am one of the LEAST coachable people around. And I’m always skeptical about learning new lessons. I’m not proud of this personality trait – but hey, truth is truth.

My thoughts, as they often did, went to “Oh no…not again.” But back then, Larry intimidated me enough (just barely) to stop my eyes from visibly rolling.

“Whenever we communicated with one another, we used a Feedback Loop.”

I continued to tune out his words. “Yeah, yeah, yeah….” I thought. “And here’s another 20 minute Navy SEAL story we’ll waste time on when we have better things to do.”

He continued, “We were in the practice of repeating back what we heard others say in order to make sure there was clear understanding…I’d like to do that now.”

He went on to tell me about the new plans he had for our current programs. He talked of digital courses, roles and responsibilities, and division of labor. He then asked me to repeat back to him what he had said.

I spoke, quietly at first, but gaining volume and confidence as I went on, momentum growing with every word. I’ll be honest – it felt weird and unnatural and I was surprised to find myself struggling to rehash his points.

Again, it took my entire willpower to stop my eyes from rolling, and to prevent the sigh of irritation from escaping my lips.

He repeated what I had said – not word for word, but in his own interpretation. And as he spoke, I realized in an instant that he had completely missed the gist of what I was trying, but apparently failing to say. He then went on to communicate his original intention – the thoughts he was trying to convey before we started this “Feedback Loop”. He explained it a little differently this time.

As he spoke, I began to see that I had not fully understood his words the first time around. In fact, I was way off in my interpretation. I listened hard.

When he finished speaking, he again asked for the Feedback Loop.

This time, I was closer, hitting several of the key points he was originally trying to make. He engaged the Feedback Loop one final time and then noted his confidence that we were both now effectively on the same page.

Finally understanding the relevance, this time my eyes didn’t threaten to roll.

I never thought about it much before that day. I always thought I was smart enough, and I heard people and what they were saying without incident. I mean, human language is pretty straightforward right?

But that day, with a simple exercise, it became abundantly clear that there was far more to this communication thing than I had originally thought.

Think back to that “Telephone” game you played when you were a kid – where you’d sit with all of your friends in a circle and one person would whisper a secret to the person next to them, who would then tell the next, and so on and so forth. The secret would inevitably work its way around the circle and come out the other end completely transformed and sounding nothing like the message that was originally spoken. (If you were me, you intentionally changed the message to make it even more outlandish than it could have ever been and then blamed the transformation on the kid next to you when fingers began pointing….don’t judge…you probably did it too.)

In that simple childhood game, it was always uproariously funny to see the message get completely lost in translation. But who knew that common game held such profound lessons that we (or at least I) never really took to heart?

I mean, as an adult, sure I can understand simple misinterpretations. I can justify someone not fully grasping my intentions when I speak, and I can even understand some of the lessons I teach being tricky to conceptualize. Surely I would know if someone was missing my point entirely….right? And surely someone would speak up if they didn’t understand. And people know when they are missing the point or don’t fully “get it”….right?

But with the installation of a very simple Feedback Loop, I learned that all of those assumptions I had been making most of my life sorely needed some serious re-evaluation.

Now, I’m telling you this story for a few key reasons.  (I promise, I’m getting to the dog training lesson soon.)

First, I want to share with you the lesson Larry teaches his students regularly – the one that I’d always listen to, nodding in agreement as he spoke, but that I never really allowed to sink in until that day in the office.

I find this abundantly clear when I write and publish this blog and folks get hung up on words or semantics, practically having a heart attack when I call a dog “selfish” . Or when they make assumptions that I would never put my dog in a crate and that I advocate that we set all crates on fire. Or when they assume that I promote locking puppies up in a basement and never taking them out into the world because I hate socialization. But none of those things are even close to what I am communicating (or trying to communicate) – it’s just that sometimes we read or hear words through the filter of our own experiences, and sometimes we miss the original point altogether.

I want to submit an idea to you. I want to encourage you to install a Feedback Loop into your training with your dog. And here’s what I mean…..

First, if I am working with a trainer, and given instructions, I find it wildly helpful to repeat back what I’ve heard. If someone conveys a lesson to me, or describes a training scenario, you’ll always find me responding by saying “Cool. So this is what I heard you say….” and then I’ll sum up the main points to make sure I’m on track. And let’s be honest, I can’t tell you how many times I’ve completely missed the mark. Without that Feedback Loop in place, I would have ventured off, hearing one thing while my instructor intended something entirely different, and I would have made little progress, made lots of mistakes and likely found myself pretty discouraged. 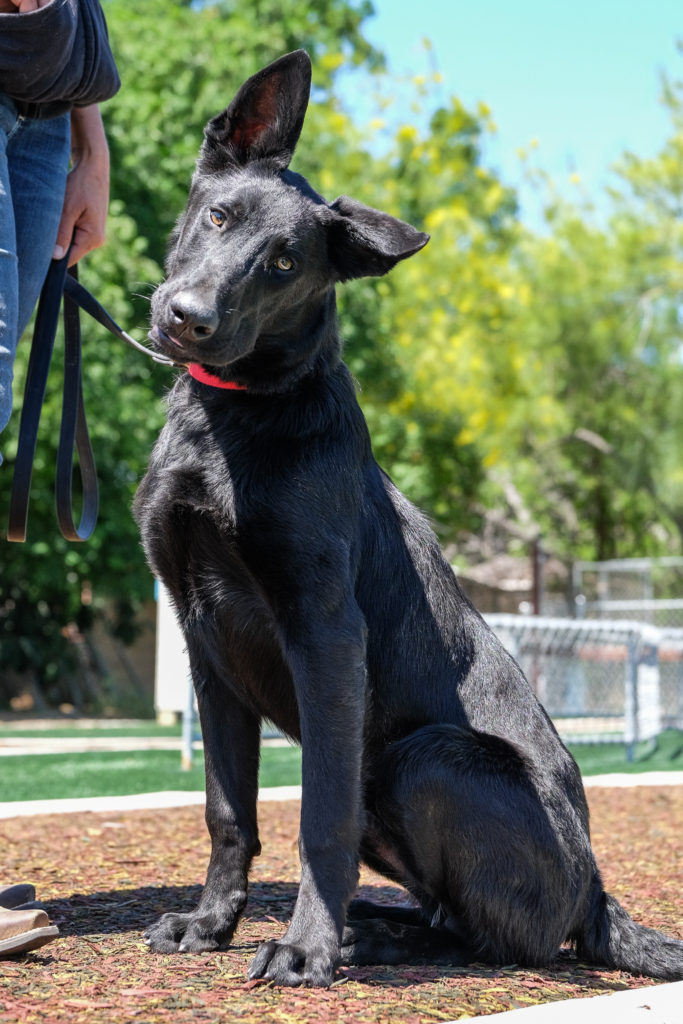 The second place I’d like you to install this Feedback Loop is in the actual training of your dog. And here’s where it is MOST important. I cannot tell you how many people think they are teaching one lesson, and their dog is interpreting that lesson in a completely different way. So do me a favor and install a Feedback Loop. It’s really quite simple. Here’s what you need to know.

If your dog fails to understand or complete a lesson, your dog is misinterpreting your lesson.

The brilliant thing about dogs is that they simply lack the ability to lie to us. They aren’t conniving creatures, constantly conspiring to take over our lives, or jump rank on us the moment we let our guard down. They aren’t seeking ways to get ahead, ways to own us or ways to dominate us and I can guarantee, without a doubt, they are not secretly plotting our demise….well, except maybe my dog Dixie….but she’s a special case for sure (I’m kidding guys…).

So your dog’s performance is in essence your Feedback Loop. Every time that your dog performs (or fails to perform) he (or she) is telling you how he (or she) interpreted your lesson. And it’s up to you to listen!

More often than not, we tend to blame our dogs. We tend to feel discouraged, frustrated and at times, downright angry. But what we fail to realize is that our dogs, as they fail to perform the lessons we swear we’ve taught, are really telling us, through their own special Feedback Loop, that they just don’t understand.

Listen, we all have different histories – different pasts and different experiences. And because of that, we all interpret things a little differently. That interpretation can lead to things like confusion, anger and hurt feelings in people and it for sure can result in incorrect implementation of training or tasks. But I want to let you in on a little secret – our dogs are no different. They interpret things based on their instincts, their drives, and the things that naturally motivate them. And they interpret things on their past experiences. Think about it. If your dog has a contrary reinforcement history – let’s say they’ve been overly rewarded for begging – imagine how their behavior will be when you first start teaching them not to beg? It could be easy to blame them for their non compliance when in reality, they are seeing our lesson through that filter of their past reinforcement – and that clouds their comprehension. Or think of the dog who is incredibly fearful. Their non compliance could mean their fear took the wheel – not necessarily that they are blowing us off because they just want to be contrary.

Installing a “Feedback Loop” into your training will improve clarity and comprehension exponentially. By inserting the simple statement “What I heard you say was…..” to your discussions with your trainers, you’ll clear up any key points that may have been inadvertently lost in translation. And by looking to your dog’s behavior as a sort of indirect Feedback Loop you can start to understand where your lessons may be causing confusion.

Don’t let your communication suffer the fate of those messages we lost in the childhood game of “Telephone”. Your dog, your training, and your sanity will thank you for it.