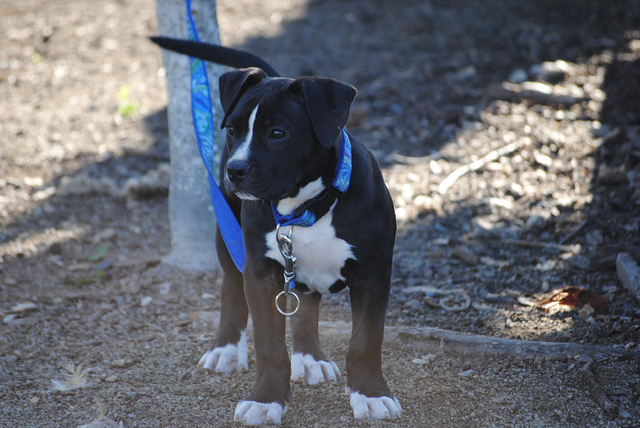 The door flung open and behind it stood a woman dressed in sweatpants in a t-shirt. She was clearly exhausted and looked like she was in desperate in need of either a strong cup of coffee or a full glass of wine – I couldn’t tell which.

A look of reprieve washed over her as I introduced myself.

“I’m Meagan from the Collared Scholar,” I said. “I hear you have an unruly puppy on your hands”.

She smiled and ushered me inside, pointing to an oversized wire kennel where a roly-poly bully puppy slept belly up, snoring slightly, so deep in slumber she didn’t even hear me arrive.

The woman explained her plight. But to be honest, she didn’t have to. Her arms looked like she got into a fight with a gang of stray cats…and lost. She must have had about a dozen scratches running from elbow to wrist, and her hands were dotted with scrapes and bruises.

She was dealing with the dreaded “Puppy Teeth”.

Instantly I thought back to my own puppy experiences when I brought home Koby before I knew anything about dogs except that I loved them.

Koby’s bites regularly had me fleeing, climbing atop the back of the sofa because, at that point, he couldn’t quite jump up to grab me.

“What do you do to stop the biting?” I asked as I again glanced at her wounded arms, and then over to the puppy who began to stir softly.

“Well,” she explained, “I’ve been told I need to teach bite inhibition, so I shriek loudly when she bites…but, to be honest, it seems to send her into even more of a frenzy.”

Turns out, this well-intentioned new puppy owner had, in fact, tried a plethora of fixes including coating her hands in Tabasco sauce (which her puppy seemed to love) and grabbing her puppy’s snout (which only seemed to make her mad).

She had researched and read and she wanted badly to control her puppy’s bite, but up until that point, she only seemed to be making matters worse. It seemed her efforts were simply an exercise in frustration.

Here’s an excerpt from the Whole Dog Journal regarding bite inhibition.

“In the dog training world, bite inhibition is defined as a dog’s ability to control the pressure of his mouth when biting, to cause little or no damage to the subject of the bite. We know that all dogs have the potential to bite, given the wrong set of circumstances. Some dogs readily bite with little apparent provocation, but even the most saintly dog, in pain, or under great stress, can be induced to bite. When a bite happens, whether frequently or rarely, bite inhibition is what makes the difference between a moment of stunned silence and a trip to the nearest emergency room for the victim (and perhaps the euthanasia room for the dog).” (Read the article in Whole Dog Journal here).

Now, remember that article I wrote a while back on why I don’t socialize my puppies? Well, hold onto your hats folks because here I go again…

I’m going to let you in on a little secret. And you may decide we can’t be friends anymore. But hopefully, you’ll hear me out when I say it….

I don’t teach bite inhibition to my puppies. EVER. 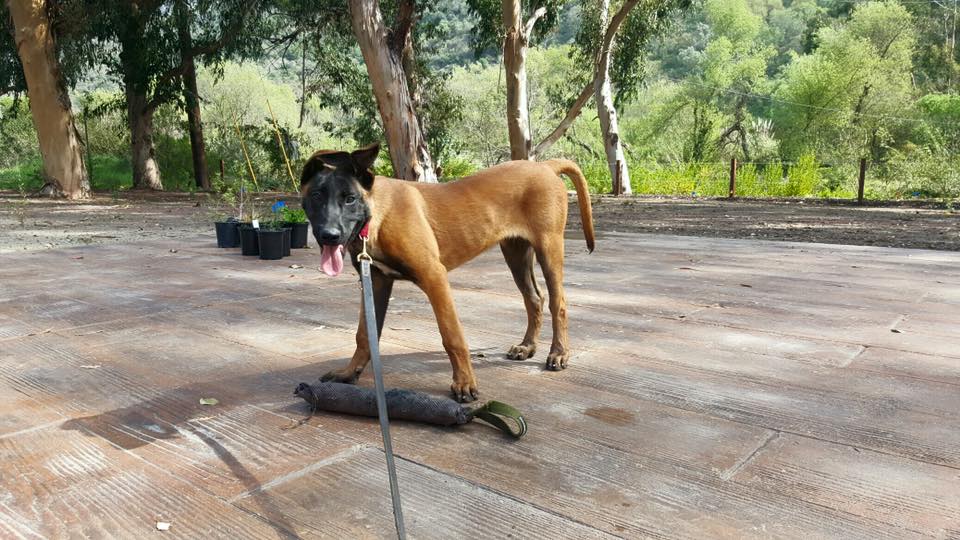 I know. Big gasps and sighs, and lots of folks downright disgusted that I say that.

But truth is, after raising dozens upon dozens of puppies, and whelping litters for some pretty influential trainers, I learned one very important thing…

And puppies with drive bite more.

Thing is, puppies explore the world with their mouths. They play with one another with teeth and paws. They wrestle…at times HARD…and they have a blast doing it. They pick up things in their mouths and carry them around, they chew, they pounce, and they shred.

This is what puppies do. And stopping them from doing what is natural for them can cause significant frustration and fallout.

Now advocates will have you believe that if you don’t turn off a puppy’s bite pressure early, they can pose a dangerous risk to society when they get older. But after spending nearly a decade rehabilitating hundreds of aggressive dogs, I can tell you beyond a shadow of a doubt that if a dog is “in pain, or under great stress”, they are going to bite hard. I don’t care how much “bite inhibition” work you think you’ve done. I promise it won’t translate.

Now, I know what you are thinking.

You’re thinking “She trains working dogs that are SUPPOSED to bite.” And you’d be right. Yes, I teach working dogs for the most part. These days, I train dogs for personal protection and protection sports where dogs need to know how to bite, and they need to know to bite hard. But the truth is, it doesn’t matter what the dog is being raised for, I’ve never once taught bite inhibition.

Not to my Malinois…

Or the several Malinois and Dutch Shepherd litters I’ve raised…

Not to my Great Dane…

Not to my Basset Hounds…

Not to my Border Collie…

Not to the litter of bloodhounds I raised…

Or the litter of Weimeraners I raised…

And certainly not to the litter of dachshund mixes I raised…

In fact, I’m bringing in a new lab puppy and you can bet I won’t attempt to teach her to control her bite, despite the fact she is going to be a family pet and obedience competitor.

And here’s the thing. Will the lab puppy bite? Absolutely. And did every puppy I’ve ever raised bite…and bite hard when they were young? You bet. Did it hurt at times? Absolutely. Did I stop them? Never.

And the crazy thing is, I can play wrestle and roughhouse with ANY one of my dogs as adults, those trained to bite and those not, and they ALWAYS control their bite pressure. Did I have to teach them that when they were young? Nope. Not at all. Because let’s face it, folks, our dogs aren’t idiots.

Here are some common solutions for getting crazy puppies not to bite.

Ok. So how do you combat those razor sharp teeth when your puppy mouths? 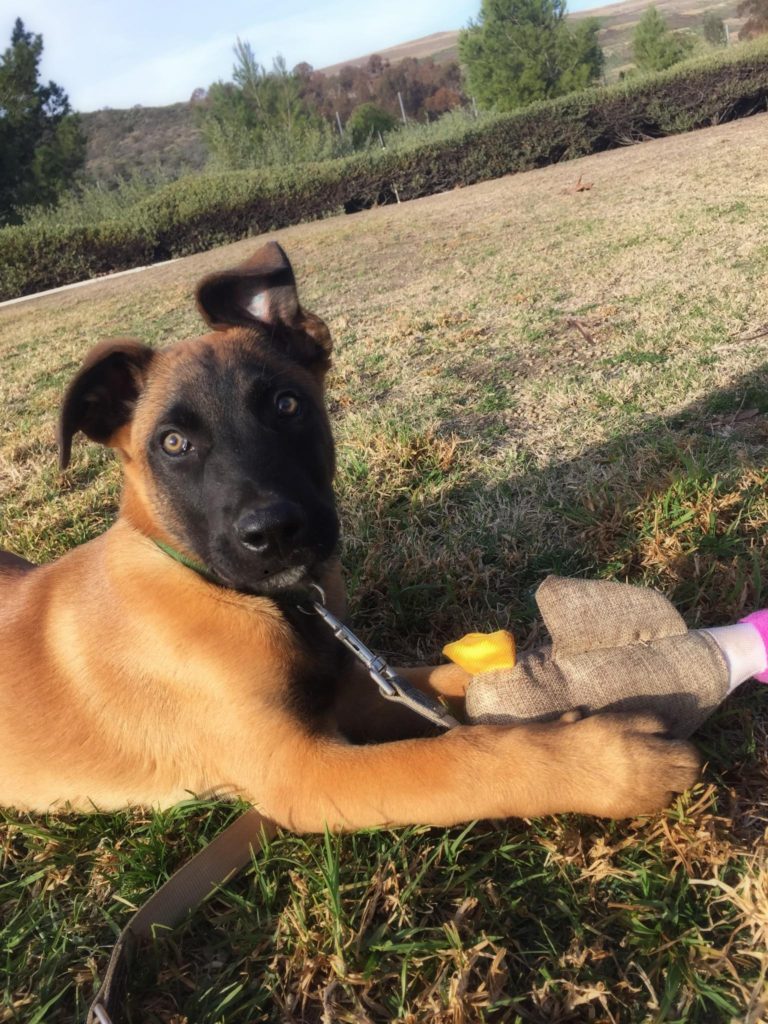 Make sure you always have appropriate chew toys at the ready and offer them to your puppy when he or she gets worked up. Give them something APPROPRIATE to bite. It’s your puppy’s natural instinct to bite and play, so make sure those instincts are satiated in a productive and appropriate way.

Now at this point, they may choose to bite you over the toy and why not? You move, jerk away and shriek at times…and that’s WAY more fun than that dead toy laying on the ground.

The key to redirecting your puppy to bite appropriate things is to make those things more fun than you are. Make the toys MOVE MORE, and make your arms and legs MOVE LESS. If you are racing around with a toy in your hand, your puppy is going to want to bite whatever is moving the most – and more often than not, that’s your legs are arms. So reel it in a bit, sit down if you have to, and make sure the toy is what is moving most.

If your dog gets too rambunctious, some good quiet crate time is a simple solution. Give them a yummy bone to chew on and let them rest. And you get some rest too. Take a break from your puppy until he or she chills out.

And here’s one more word of wisdom when it comes to those razor sharp puppy teeth that nobody loves.

Your puppy WILL grow out of it. So don’t spend your days frustrating your puppy by trying to go against the grain and turn off their natural instincts. Instead, play with your puppy, redirect your puppy to toys, and wait for them to grow up. I promise those puppy teeth will be gone before you know it.

Want to learn how to raise a healthy, happy and confident puppy? Join us for our Puppy Raising 101 course. The fun starts January 19th.

26 replies to "An Exercise in Frustration: Why I never teach bite inhibition to puppies"