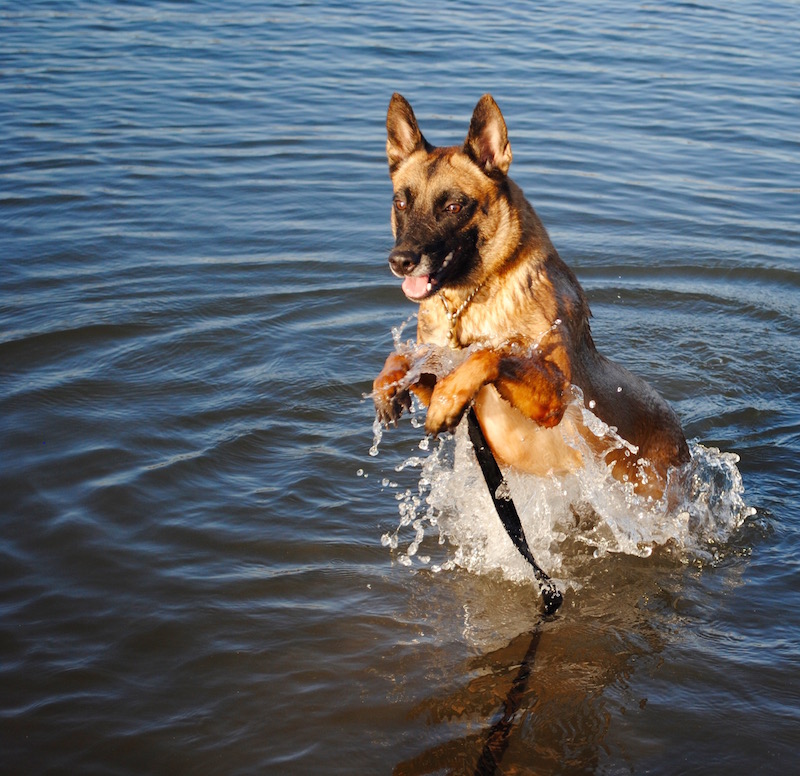 Living 10 minutes from the beach definitely has its perks. Although it was a huge shock to my system moving out of middle-of-nowhere Texas, where acreage was the norm, most of our shopping was done at feed stores, and getting organic anything meant you had to grow it yourself, I must admit the dogs and I have settled back into city living quite nicely.

However, there are still days when I long for wide open spaces, green pastures, and split rail fences. When city living gets to be too much, we regularly seek refuge at the beach.

We’ve carved out a space for ourselves at a place called Fiesta Island. As it’s name suggests, Fiesta Island is a large open island off the coast of San Diego that, unlike most beaches in the area, allows dogs year round.

Just the other day, during a San Diego style heat wave, as temperatures jumped into the high 90s and the humidity skyrocketed, a friend and I decided a retreat to the beach was in order. Piling the dogs into the truck, we headed west, the anticipation of escaping the thick summer air building as we drove.

As we pulled onto the island, we scanned the shoreline for an open spot. Since we travel with a group of dogs in training, at various stages of their learning and development, we always opt for a quiet space with minimal dog and human traffic. That day, we had plenty of options.

Selecting our spot, we pulled the truck onto the sand and began to unload our gear, constructing a pop up tent to shade the transport kennels where the dogs would rest as they waited their turn for training.

One by one, we pulled the dogs out and worked their obedience, building engagement and focus despite the parasails that fluttered on the shore and the occasional jet ski that surged by.

As I leashed my pup for some work on heeling, a car pulled up, parking 20 yards away from my truck, momentarily distracting me from my training as I heard the car brakes squeal to a stop.

Within moments, the car door flung open and a woman emerged, walking around the back of her car, retrieving a beach chair from the trunk. She then opened the rear door of the car. Instantly, a large shepherd dove out, and, brimming with excitement, he followed the woman down the beach, stopping for a sniff and an occasional mark as he did.

Now, my dog is social with other dogs. But I don’t let him engage or play with dogs we don’t know. Not only do I want to avoid any possible altercations with dogs of unknown temperaments, but I also want to maximize engagement and focus in my training… and I can’t do that if my dog is worried about playing with other dogs.

As the woman set up her beach chair, I got back to work, practicing our obedience routine, breaking up the training with some fun retrieves in the water.

Soon, the shepherd in the distance took notice and decided whatever it was we were doing needed investigating. I didn’t blame him….our training is pretty fun!

He began to approach. When I realized his owner wasn’t paying attention, her dog now a good 50 yards away from her, I rewarded my dog one last time and walked to my truck, loading my dog into his crate as the loose dog followed a few steps behind.

Seeing me avoid the dog, the woman, who was now lazily swimming called out, beckoning her dog to return. The dog paid her no mind as he circled our camp, agitating the dogs in the kennels, and occasionally lifting his leg on our beach chairs and my truck.

A woman on horseback approached and instantly, the dog who had made himself at home under our pop up tent, effectively halting any training we were working on, lost interest in us and ventured over to investigate. The horse became nervous, agitating as the dog attempted what he thought was an appropriate greeting. Unfortunately, this horse didn’t quite get the purpose of the “butt-sniff” and instead, scooted to get away from the dog, spooking right and nearly throwing his owner onto the sandy shore. The dog remained under foot of the horse for what seemed like an eternity before finally heeding the 20th “Come” command his owner called from a raft she was now lounging on in the sea.

For the next hour, we strategized our training sessions, keeping the loose dog in our sights, knowing full well that the owner wouldn’t retrieve him should he impede on our space. Needless to say, we all breathed a sigh of relief when she finally loaded up her dog to leave.

Shortly after she drove away, another car pulled up on the beach, parking close to my truck, a dog spinning in the backseat. Given our experience with the shepherd, we were pretty fed up with off leash dogs and, seeing the over-excited dog bouncing in the backseat of the car, we immediately jumped to conclusions. But this time, it was different.

A man emerged from the car, opening the rear door for his black lab who bounded out, brimming with enthusiasm. But this time, the dog didn’t race over to investigate. In fact, the dog walked in a perfect off leash heel down to the water, focused the entire time on the bumper toy his owner carried under his arm.

We watched the man as he performed precise directed retrieves in the water, his perfectly trained pooch obeying his every command. After a short while of admiring his hard work and his very well trained dog, we went back to our own training, pulling out the dogs one by one, practicing their obedience and letting them swim.

I capitalize on many parks and open spaces within the county and I can’t tell you how many times off leash dogs have approached.

I’ve been training an aggressive dog in a space where leashes were the law, only to have an off leash husky approach, his owner calling out “He’s friendly!” as he did.

I’ve been working with a client with two aggressive dogs in her own neighborhood when another neighbor opened her front door, letting her dogs out because they “wanted to say hello”.

And rarely do I work my competitive obedience in public without being approached by at least one off leash dog or owner who wants to chit chat.

Just because your dog is friendly, doesn’t mean others are. Even the most social and friendly dog can suffer a serious injury from trying to elicit play from an unfriendly or apprehensive pup. Not to mention, your pup can put unnecessary stress on a dog that is insecure, a leashed dog, or one that is working really hard to learn new behaviors and stay focused.

Had our dogs been less than friendly, or had the horse spooked wrong, the overly friendly and inquisitive shepherd at the beach that day could have ended up with a nasty injury.

Unless you are at at dog park, your best bet is to always ask before letting your dog approach and be sure to be respectful of the personal space of others. By doing so, you’ll ensure your dog’s safety, as well as the happiness and well being of the other dogs (and horses) around you.

Unless your dog is perfectly trained and listens to your commands consistently, you need to be using a leash. While I understand you want to let your friendly dog run off leash, if you can’t call him to you, you are putting him in danger by allowing him to run leash free.

Without the safety of a leash, your pup could quite easily run into the street, chase a stray squirrel, or approach a fearful or aggressive dog. Not only is it incredibly dangerous to have your dog who listens “sometimes” off leash, it’s also incredibly rude. Allowing your pup to invade the personal space of others is inappropriate, so be sure to keep your pup and yourself in check as you venture out to public places.

That day at the beach, it was a breath of fresh air seeing the man exit his car with his perfectly trained black lab at his side. Sadly, this is so uncommon, it stopped us dead in our tracks as we stood in awe and appreciation of his dedication to solid training.

When my dogs are with me in public, they are completely under control. Regardless of the stage of the training, I am working with them when they are out, teaching them, shaping new behaviors and proofing old ones, and working through any issues so I can reliably trust their obedience. As a matter of fact, my 9 month old puppy, who never leaves my side, who is so crazy focused on the toy that he doesn’t know the world is going on around him, and who is completely social with other dogs still runs around at the beach with a 10 ft lead attached to him. While most would say he is “good enough” to let off leash, I know without a doubt that we haven’t proofed all of his commands to a point where I can 100% trust him. His safety is my number one concern and I won’t cut corners simply for the sake of convenience.

Your dog is your responsibility – especially when you are in public around other people, dogs, horses, or any other distractions that might pop up. For that reason, its important for you to be present.

Don’t think a trip to the beach means you can swim out into the water and let your dog roam free, keeping himself busy and entertained as you do. Don’t get lost in your cell phone, text messages, or emails and use parks and beaches as a place for your dog to exercise himself.

Just because a place allows dogs, doesn’t mean everyone there likes them. I’d venture to say a majority of people don’t want to spend their afternoon entertaining or managing your free range pup while you check out and enjoy an afternoon at the beach. Keep your pup close, under control, and out of other people’s space. Better yet, if you are out with your dog, ENGAGE with him. Play with him. Train him. He’s your responsibility. Don’t take it lightly.

At the end of the day, when you take your pup in public, whether it be to an off leash dog park, the beach, or an outing to the store, be respectful of other people and their personal space. Spend time training your dog and don’t expect him to entertain and exercise himself. Believe it or not, your pup most likely WANTS to be with you. Out of everyone on the beach, you are most likely his favorite. By engaging with and training your dog, not only will he be happier, but you’ll keep him safe, and keep other people and their pets happy and safe as well.