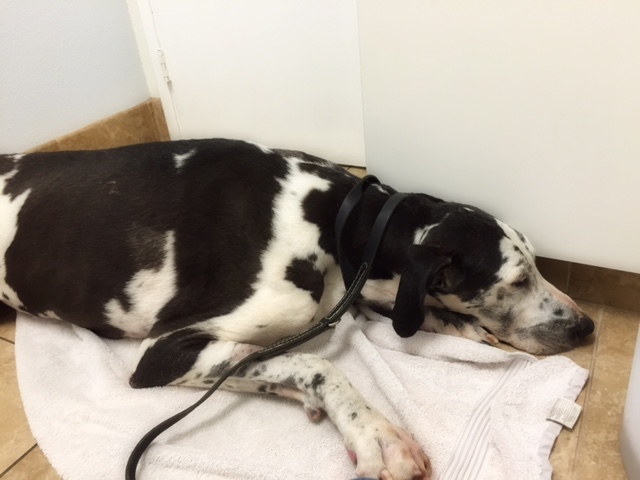 When she went outside to use the bathroom, she did not come back in.

I was sitting on the couch working on my computer and it took me a moment to register I was one dog short.

By the time I realized she hadn’t come back in, she had probably been in the yard for about 15 minutes. It wasn’t like her. She always came right back in. She had her cushy bed by the door and she never wanted to lay anywhere else.

I hopped up and sprinted to the door. Kira is a 13 year old great dane and if you know anything about the breed, you know that rarely do they make it past 9. Over the years, we’ve had our share of health scares, but my “Warrior Dane” has always managed to bounce back. As her age progresses and her body becomes more fragile however, I find myself becoming hyper-vigilant, taking any out-of-the-ordinary behavior very seriously.

I spotted the big dog laying down in the middle of the yard. “It’s just hot…” I reasoned, trying to slow my impending panic. “…She must have gone outside to cool off”.

As I approached, I instantly realized that wasn’t the case. My massive, 120 lb dog lay in the sphinx position in the middle of the yard, neck outstretched, a small string of drool hanging from her pursed lip. My heart sunk and bile rose up in my throat. This was bloat. I knew it instantly, and given the nature of the ailment, I knew I didn’t have much time.

When she was 5 years old, Kira suffered a from a severe case of GDV (Gastric Dilatation Volvulus), otherwise known as the dreaded bloat and torsion. Simply stated, her stomach filled with gas and as a result, it dilated causing the gas inside to become trapped. As pressure built, the stomach rotated in her abdomen, cutting off blood flow to her vital organs and launching her into critical condition within a very short amount of time.

Fortunately, we caught her condition early and rushed her to the vet for life-saving emergency surgery. We had dodged a bullet then, but just barely.

During her surgery, we had her stomach “tacked”, a procedure called gastropexy whereby the stomach lining, through the magic of modern science, is “stuck” to the sides of her abdomen, preventing future torsion from occurring. Remembering this, my hope surged.

“It can’t be that bad.” I desperately tried to convince myself, “The stomach tack will keep her safe.”  But the momentary surge of hope plummeted the moment she began to retch.

She retched hard, coughing up a small amount of white foam, immediately afterwards collapsing to the ground, overcome with weakness as her blood supply began to restrict. She was dying, and I had to save her.

With all of my strength, I attempted to lift her weak and lifeless body. As she weighs about 20lbs less than I do, when she doesn’t want to get up (or can’t), there is not much I can do about it.

I coaxed and pleaded for her to help me, all to no avail. Standing over her, I picked up her front legs, straightening them out, only to have her fold them back underneath her enormous body when I tried to lift her rear.

Finally, through a twist of fate, one of my Malinois grabbed the flashlight I was using to investigate my bloated dog’s condition and took off through the yard, light shining from her mouth as she proudly raced zoomies around us. As she made her second lap, she leaped clear over my dane, startling the previously listless dog and giving her the encouragement she needed to attempt to stand.

Breathing a sigh of relief, I helped her up and together, we struggled to make our way to the truck.

Once at the vet, Kira was in fact diagnosed with “Bloat”. In this case, since her stomach had been “tacked” (or pexied), it hadn’t twisted yet. However, even with a “tacked” stomach, Kira could still torsion if the pexy broke loose. And although she hadn’t torsioned, the situation was still quite dangerous as her stomach and intestines swelled so severely, they pressed on her Vena Cava, a major vein that carries deoxygenated blood to the heart.

Immediate intervention was required with both stomach medication and IV fluids and even after, her condition was labeled critical.

What you need to know about bloat

Bloat can affect any dog, however large breed, deep chested dogs are most at risk. Bloat is commonly found in Great Danes, Shepherds, Dobermans, Labs and Basset Hounds. The cause of bloat is still unknown but the condition is quite common and the results can be devastating.

“Bloat” refers to the buildup of gas in the stomach. In response, the stomach dilates, effectively trapping its contents along with the excess gas inside. Gas production continues and the dilated stomach builds pressure.  As it swells, it begins to push on surrounding organs, causing symptoms such as difficulty breathing and coughing as well as other tell-tale and alarming signs.

In many cases, without immediate intervention, as pressure builds, the stomach rotates within the abdomen. This “torsion” is called “volvulus” and is rapid and deadly. When the stomach twists, blood flow is restricted and in many cases, as they lose oxygen and blood flow, the abdominal organs will begin to die. Surgical intervention is the only option to save a torsed dog.

What to Watch Out For

If your dog is experiencing the symptoms above, you need to get to the vet immediately. Bloat is a veterinary emergency that can go from mild to deadly in a matter of moments.

If caught early enough, before the stomach torsions, medication and fluids can typically manage the bloat, preventing the need for surgery. If the bloat progresses without intervention, torsion can occur at which point surgical intervention is the only option.

I cannot stress enough the importance of seeking immediate medical care for your dog if you suspect he is bloating. Don’t try to treat at home. Don’t assume a “wait and see” approach. I am notoriously conservative with veterinarian intervention for most afflictions, however bloat is absolutely not one of them. 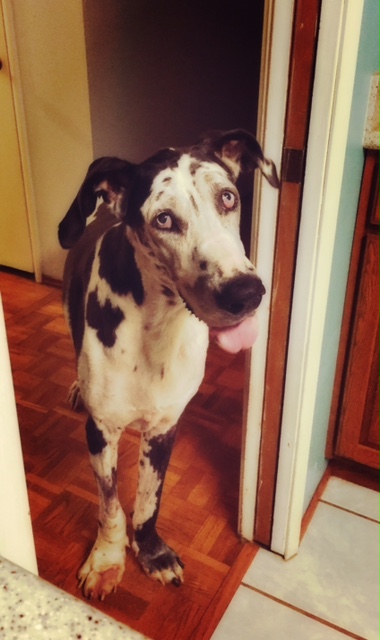 Now, I’m no vet. But I do feel like I’m pretty well versed on the science of veterinary medicine. After training and caring for hundreds of dogs in my career, and after 4 direct experiences with bloat and GDV, I can tell you first hand this is a nasty condition that comes on fast.

From my experience, I very strongly believe there are a number of risk factors that can increase your dog’s chances of bloating.

Prevention of bloat is a sticky subject as there is absolutely a genetic component that can render tips and techniques for keeping the condition at bay completely useless. That being said, there are some things you can do to minimize your dog’s chance of developing the condition.

Here are the critical things I would recommend to MINIMIZE your chances of bloat:

No method is fool proof so your best bet is to know the signs and symptoms and have a plan if you are faced with an emergency.

If I could give you one piece of advice after my experiences with bloat its this: aside from some obvious precautions, you probably can’t prevent it. Instead, know the risk factors, signs and symptoms and seek medical intervention immediately if you suspect your dog is afflicted. Time is of the essence and the less the condition has advanced, the better the chance treatment will be successful.

Oh, and if you have a large dog, are not a bodybuilder, and you live alone, get a sling so you don’t have to go through the agony of manhandling your sick dog into your vehicle. Trust me….its worth it.

Kira is back home with me now. Some other developments have her stabilized but in critical condition. Stay tuned for more of her story, as I will share with you our experiences as we journey through this battle together. 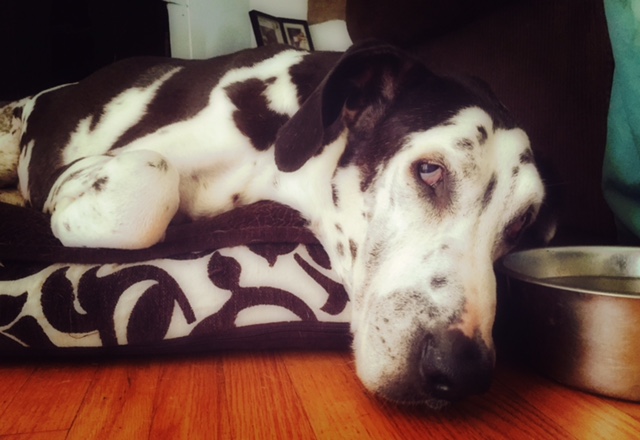 71 replies to "GDV Strikes Again: My Experience with “Bloat” in Dogs"