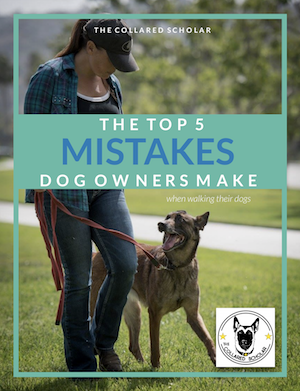 Take Control of Your Walks

Get your FREE eBook and start turning bad leash manners around!

It's Time to Reclaim Your Walk

Get our Free eBook and learn the top mistakes dog owners make when teaching leash manners to their dog, and what you need to do to avoid them! 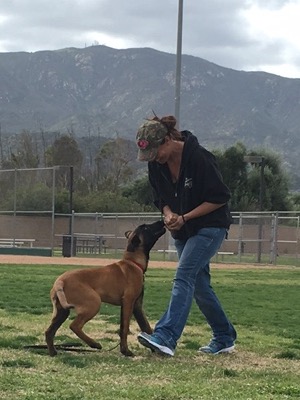 The sliding doors of Tractor Supply whooshed open, and the heat from the day rushed inside as if in an attempt to shelter itself from the blistering sun. As I stepped through the entryway, the puppy I had in tow launched to the end of my leash, thrilled to be in a new place, surrounded by all of the new people and interesting smells.

Instantly, we began to play. Those in the store must have thought us foolish as I raced up and down the aisles playing with my pup, feeding him snacks simply for being with me, and then darting away, encouraging him to chase.

He was three months old, and this was his third big adventure to the store I lovingly refer to as “Disneyland”. Let’s be real – Tractor Supply IS pretty much the happiest place on Earth.

As we raced up and down the aisles, me giggling loudly and him trying his best to catch me, we ran into another dog owner, holding her large yellow lab tightly on lead. The dog instantly pulled to get to us, his owner stumbling a few steps forward before regaining her grip and wrangling the dog back to her side.

The lab gasped, his throat straining against the nylon collar as he tried with all of his might to fight the leash. But his efforts were thwarted, and before long, my pup and I had darted out of the aisle and out of sight of the dog that wanted nothing more than to join our game.

When I have young dogs in training, 90% of my time is spent making a fool of myself. As others are perfectly heeling their pups up and down the aisles of busy stores or preventing their dog from pulling by keeping a tight grip on the lead, or even asking for complex behaviors like sit, stay, and down, we are spending our days playing.

Every time we pass those perfectly poised pups practicing their obedience, they instantly break focus and do everything in their power to join us as we frolic. Many times, owners get irritated at us as they try to refocus their pup. They may lure their distracted dog with unwanted treats that the dog promptly spits out, or they may pull the dog back to their side, wrapping their hands around his snout, forcing his gaze back where it should be. All the while, the dog pines to be with us. And all the while, the dog remains distracted and unfocused on their owner.

Here’s why my pup and I do what we do

It may sound impractical, but as my young pup and I play in the stores or race through a busy park, playing fun games accompanied by lots of treats, I am actually teaching him something. In fact, through our games, we achieve one thing that many dog owners constantly strive for and scarcely attain. We achieve engagement.

Through our games, my pup wants to be with me. In fact, he learns that no matter where we go, no matter what is going on with his surroundings, he can count on me to be the most interesting thing around. As others struggle to keep their dog’s focus, my pup rarely diverts his gaze from mine. And the beautiful thing about it all is that he stays focused because he WANTS to….not because I force him.

When training your dog, believe it or not, engagement comes first. If your dog is focused on the world around him, you’ve lost the training battle before you’ve even begun. You can’t expect your dog to perform complex commands that you bark at him if he isn’t paying attention to you to begin with. For that reason, I’ll offer up that if you struggle with focus, it might be time to lower your criteria for reward, and begin celebrating your dog for engaging…….only. Make him WANT to be with you and want to work with you, and your commands will no longer fall on deaf ears.

Here’s what you need to know:

The next time you are out with your dog in a busy public space and you fail to hold his attention, ask yourself this question.

“What is the reward he’s after?”

If he’s gazing at other dogs, he’s likely been rewarded by being allowed to sniff, interact, or play with them. If he’s staring at the clerk at the checkout, chances are he’s been given a treat at checkout in the past.

Then ask yourself this:

“What am I doing to make him want to pay attention to me above all else?”

If the answer is barking commands at him in hopes he’ll comply, I guarantee the checkout clerk or that dog over in the distance are far more rewarding than you, and you’ll consistently struggle to keep his focus with them around.

To get him back to wanting to be with you and work with you, simply change your expectations, get more interesting, and reward him for his focus. Don’t be afraid to make a fool of yourself either! It may feel funny and a little embarrassing at first, but in no time, you’ll be having a blast alongside your pup and achieving higher levels of engagement, connection, and training progress than you imagined possible.

Good luck, and have fun!

30 replies to "Got Focus? Setting Expectations and Winning Your Dog’s Attention"