It's Time to UP your Tug Game!

Download our free guide and learn how to play a more effective game of tug! 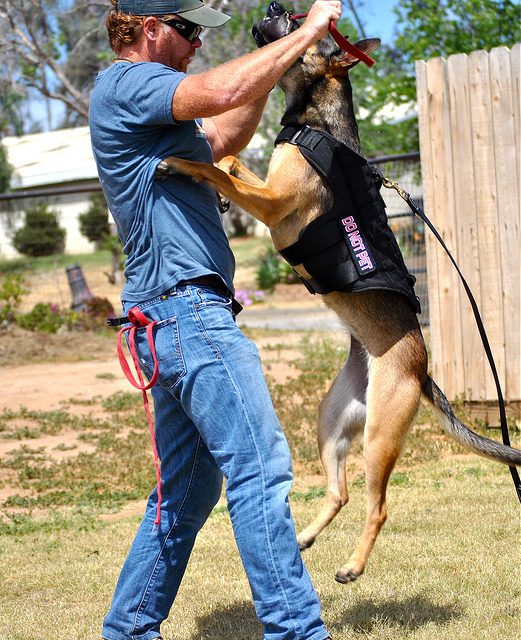 The tug was made of leather, roughly stitched, with two bright red handles fashioned from a strip of utility webbing.

Being the MacGyver style, former Navy SEAL that he was, he opted to craft his own toy, proudly proclaiming “I’m not buying one of those. I’ll make it myself” when I encouraged him to get a tug for his newly acquired Belgian Malinois.

True to form, the next time I saw him, he had fashioned a toy out of some old scraps of leather he had laying around.

It was rough in design, lacking the clean lines that store bought toys had. But it was surprisingly well done and sturdy for his first attempt.

“Nicely done,” I said as I examined his work. He smiled cautiously in response, taken aback by my compliment, fully expecting me to tease him about the misshapen toy.

I didn’t tease him. I was legitimately impressed.

Excited to show off his creation, he began playing a fierce game of tug with his Malinois. She was intense and loved the game, occasionally barking with excitement when the tug took too long to find it’s way to her.

He’d present the tug, ask her to “Out!”, reward her, and they’d play again. Wash. Rinse. Repeat.

They were having fun, lost in their game and tuning out the world around them.

“Dammit!” he exclaimed part way through the game, letting the tug drop with as the words escaped his lips. His focus shifted to his hand and on it, I saw a tiny droplet of blood.

I knew what happened. She had clipped his hand, traveling up the tug as they played and transferring from tug to flesh, catching him on his thumb.

She held this trick up her sleeve for as long as I’d known her. Winning was the goal of her game and she knew how to do it. If she made her way to his hand, he’d let go … every … single … time. She was smart, and she’d figured out the game quicker than he did.

I laughed, and in a moment the teasing commenced. We were friends. And it wasn’t uncommon for the two of us to joke relentlessly. He knew it was coming, and he braced for the assault.

“Remember, put BOTH hands on the tug” I instructed.

He knew this. But habit was hard to break. He did as he was told for a few repetitions, but soon, he found his old tendencies and in no time, he took a tooth to the hand once again.

For dogs with drive, tug play can be one of the most valuable rewards a trainer can use to bring motivation to their work. However, it can be easy to get lost in the game and neglect technique, not giving a thought on how to deliver, present, and play with the toy in a way that is the most effective for both the dog and the handler.

I see this illustrated every day as clients regularly reach out for help getting control over their tug-crazy dogs.

“I get bit EVERY day.” they plead.

In fact, over a dozen coaching clients I’m currently working with are struggling with their tug game. And they are only a small drop in the bucket.

Problems in play are common. Dogs regularly either miss the mark entirely, clipping a hand in lieu of the toy, or they thrash so hard that it becomes an uncomfortable game to play. Dogs won’t “Out”, they won’t let go, and others travel on the toy, never securing their grip and eventually finding their way to flesh.

What’s meant to be a fun game between dog and handler, evolves into a painful or frustrating endeavor.

But here’s the thing. More often than not, these frustrations come from our own handling of the tug – not our dog’s technique.

You see, there are mechanics to the game. Techniques and strategies. This isn’t simply a drop of the toy and congratulations, reward achieved. There’s more to it than that. And by knowing good technique, you can absolutely make the game fun again.

Here are the top mistakes that trainers and handlers make when playing tug with their dogs.

Playing tug with your dog can be hugely rewarding. But if we don’t get it right, it can be frustrating and downright painful.

If your dog is pulling, thrashing, missing the toy or traveling on the tug, it’s time to look at your tug handling as it’s the likely culprit. For us to be the MOST effective, we more often than not need to change our own movements to get the game right.

Don’t be haphazard with your tug game. In the end, your dog, your back, and your hands will thank you!

31 replies to "Getting Strategic: The Top 5 Mistakes Handlers Make when Playing with Their Tug-Crazy Dogs"

Learn how to use tug play more effectively in your training!