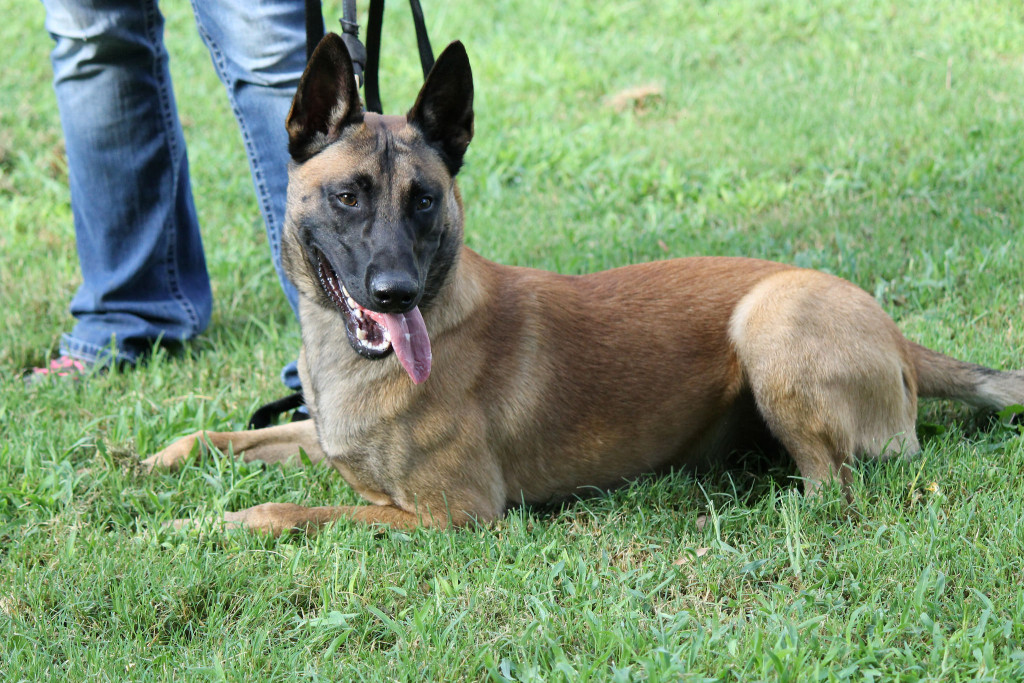 “Take the dog off the lead!” he shouted from the sidelines of the field, exasperated with my seeming inexperience.

“She’s not ready,” I retorted as my dog stared at the decoy, waiting for her cue. She had never worked off leash and had just begun learning to “hold the line”, staying until released as the decoy taunted her down field.

“Take off her lead, Meagan,” he commanded once again, his resolve unwavering.

“She’ll break the line! She still needs the lead,” was my response. I was shouting now.

Again he commanded me to remove the lead, and for a while I protested… until I didn’t. He was the training director, and I felt compelled to do as I was told.

With hesitation, I removed the lead from my 9 month old pup as she stared at the decoy from her perfectly poised down-stay.

The decoy made eye contact, nodded his head, and began to rattle his clatter stick.

The noise shot through the field with force, and the moment it did, the very instant the sound waves hit the dog’s ear, she was off, like a bullet, slamming into the decoy hard, frustrated it had taken me this long to send her in.

But I hadn’t sent her.

I gave a condescending look to the training director, screaming “I told you so!” in my head, the point obviously communicated with my glare.

“Call her back!!!” he shrieked as the dog self rewarded by taking a piece of the decoy exactly when she wanted to. I was slow to respond, making sure he took note of the fury pouring from my furrowed brow.

Finally, I did as he requested, using my whistle to recall the dog to my side and rewarding with an abbreviated game of tug the moment she hit her mark. 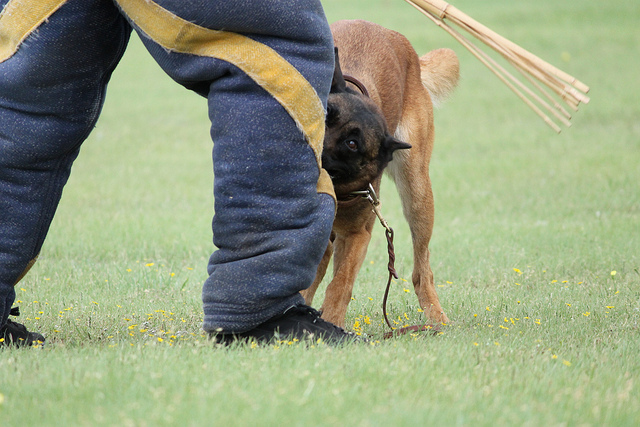 “What are you doing?!” came bellowing from the sidelines along with some choice obscenities I’ll refrain from including here. “Why did you reward her? She broke the line!”

But I wasn’t dealing with that now. True, she broke the line. And she rewarded herself for that. I didn’t stop it, and now, it was too late. She got the reward, and you can bet she’d remember that.

Then, I had recalled her. I had asked her to come, and she performed the command flawlessly. The recall had nothing to do with her breaking the line, and I was convinced she wouldn’t link the two together. If I punished her for coming, all I would achieve is a dog who didn’t want to come. And since we hadn’t yet worked on phasing out her reward, this scenario was something my dog was unfamiliar with.

He argued persistently that the reward was undeserved. She had broken the line. She shouldn’t get to play. And I protested, our discussion escalating until we were both yelling, neither of us willing to submit to the other’s point.

After some debate, I was finally hushed and instructed to repeat the exercise, again with the dog off lead.

The war raged in my head as I knew he was wrong, but I complied, determined to prove my point… determined to let my dog prove me right in hopes that the training director would see his errors.

Again, the dog broke the line, launching for the decoy the moment the clatter stick sounded, and again I recalled her, this time foregoing the reward, regardless of the fact that I felt it was wrong.

She hit her mark, and peered up at me, anticipating the tug, confusion setting in the moment she realized it wasn’t coming.

“Do it again,” he bellowed, as if my compliance was non-negotiable.

I did as he requested.

The dog broke the line, the dog was recalled to the whistle, and the dog let go. But this time, she failed to return. Instead, she made it a point to frolic through the crowd, picking up any stray piece of equipment she could find, and steering clear of me as now she was making her own games.

Again, the weight of my stare and the fury that poured from my body was palpable. I willed him to realize he was wrong, to acquiesce, and to let me do it my way. But he never did.

“Punish her!” echoed from the sidelines.

Bewildered, I responded… “How?”. She didn’t have a lead on, and at this point, she was making her own games… self rewarding like crazy in the midst of the crowd who gawked at the argument that was unfolding in front of them. All I could think to do was fetch her and put her leash back on. But he had other ideas.

“Grab her by the collar, and correct the hell out of her! Use your hands… do whatever you have to!” was his response.

Again, against my better judgement, I complied.

I walked to my dog, grabbed her by her prong collar, and gave her a solid correction.

I vaguely remember hearing the training director shout, “Don’t baby her!” as onlookers rushed to my aid, my hand getting tangled in the collar. The dog, confused about the events that were unfolding, and frankly, showing her backbone, stood up for herself when I unfairly corrected her. She was confused and frustrated, and as emotions peaked, she unloaded on my hand, crushing my bones as she did.

I walked off the field and never returned.

As a trainer or handler, it can be challenging to stand your ground when you are faced with the strong opinions of those who have far more experience than you. In my case, I was new to bite work, this being my first year in the game. And my training director had been doing this for what seemed like an eternity. He regularly won titles and was incredibly accomplished. It was hard to stand up to him. And in my case, not speaking my mind came back to bite me… quite literally.

Here are a few things that got in the way of our training that day and that ultimately landed me in the emergency room with a broken thumb.

You know your dog best

Here’s the thing. You know your dog best. After all, you are the one who spends every day with him, and you are the one responsible for your training. You are the one conditioning your commands day in and day out, and for that reason, you ultimately know what your dog can take, and what he can’t.

When working with a training club, there should be dialogue. Of course you don’t know everything, and of course there is plenty you could stand to learn. However, training should be a team effort – not a dictatorship.

If you feel strongly that your trainer has it wrong, or if you aren’t comfortable with the training that is about to occur, speak your mind and stand your ground. Just be as tactful as possible, and try to maintain a productive dialogue. After all, shouting back and forth and littering the conversation with obscenities, the way we did that day, isn’t productive for anyone.

That day on the field was traumatic for both me and my dog – there’s no doubt about it. But everything could have been avoided if I had simply taken a different approach.

At the end of the day, it’s okay to disagree, and it’s okay to advocate for your dog and for your training. In fact, since you know your dog best, I’d argue that advocating is your job. But as you do, don’t let your pride get the better of you. Don’t set out to prove people wrong, and don’t use your training to make a point. It isn’t productive for either you or your dog. And certainly don’t get so stuck on being your dog’s advocate that you become rigid and unwilling to listen to the advice of others.

In my time training dogs, I’ve trained with a wide variety of personalities. Some with tact in high stress situations, and some who have completely lost their social graces and who relate better to dogs than they do with humans. But we have something to learn from everyone we meet. And if we approach our relationships with an attitude of openness to learn, we’ll be far better off in the long run. While they might not always be right, and you might not always agree, you can still find lessons to be learned from just about everyone. Just be sure to stand your ground when it matters, and remember, ultimately, you know your dog best.