It isn’t a new philosophy. I’m not coining anything. I’m simply telling you something that I’ve learned from half a dozen trainers or more who preceded me, from those who have more experience than I do, from those who are my mentors.

In dog training, there are rich dogs, there are poor dogs, and there is the “working middle class”.

Close your eyes, and picture a child. This particular child is born into a wealthy family and wants for nothing. He’s never known work, and he’s never known want. He has the world at his beck and call. He is spoiled, and his parents give him whatever he wants, whenever he wants it. Now, tell me what you’d suspect his behavior looks like as he grows from a toddler to a teen to a young adult.

In my mind, I picture a scene from Willy Wonka’s Chocolate Factory. Perhaps it’s because I just watched my nephew perform in the play at his school (he was spectacular by the way), but when I think of “spoiled” and “wanting for nothing” I immediately picture Veruca Salt or Augustus Gloop. Coddled, bratty, demanding, and inevitably falling into a garbage chute or being sucked up a tube after falling into a river of delicacies post over-indulgence.

That’s what comes to mind for me at least.

Now think of a poor child. A child who has never known luxury. A child who has no expectations, because they’ve simply never HAD. If we are sticking with the same analogy, I’d envision little Charlie Bucket, who was unselfish and honest, who was grateful for what he had, even if it wasn’t much, and who cared more for others than he did for himself. Sure, he made mistakes and found himself floating dangerously close to an exhaust fan at one point, but for the most part, he was a good and honest, and most importantly, a humble kid.

Now think of an adult. Picture a 30 something man who has landed himself a secure, comfortable, and well paying job. He pays his dues and works hard, always on time, rarely calling in sick.

Got it in your head?

How do you suspect his attitude is when it comes to work?

Now envision your working middle class adult started out life as a poor kid, as little Charlie Bucket who couldn’t even afford a bar of chocolate?

If you’re anything like me, you envision two totally different people. In my imagining, the former rich kid has a chip on his shoulder. Once, he had everything and wanted for nothing. He was spoiled, and now he has to work. And he isn’t happy about it.

Now if you’re like me, you see the former poor kid grateful for a paycheck, grateful to have a job that pays. You see someone who is humble and motivated.

I may be generalizing here (cue Internet Bullies), but I would venture that someone who started out in life in a very well-to-do family, who was spoiled with new things at every whim, and who was catered to and never wanted for anything but who found themselves later in life as a working middle class laborer, would have a far different perspective than someone who started out in poor and destitute economic circumstances.

So what do you think? Is your dog a rich kid? A poor kid? Or working middle class?

(Disclaimer: I am in no way generalizing about societal classes. I am not suggesting that all rich kids are spoiled brats, or that those that come from wealthy families have no work ethic, or the all poor kids are humble….I’m just trying to paint a picture and create a good metaphor a la Charlie and the Chocolate Factory, so try not to freak out too much.)

Let’s look at another example.

How about the dog who has his fill every day of food, free fed and allowed to graze at his heart’s content. He has an endless supply of toys scattered around the house, and when he demands attention, he gets it….every single time. 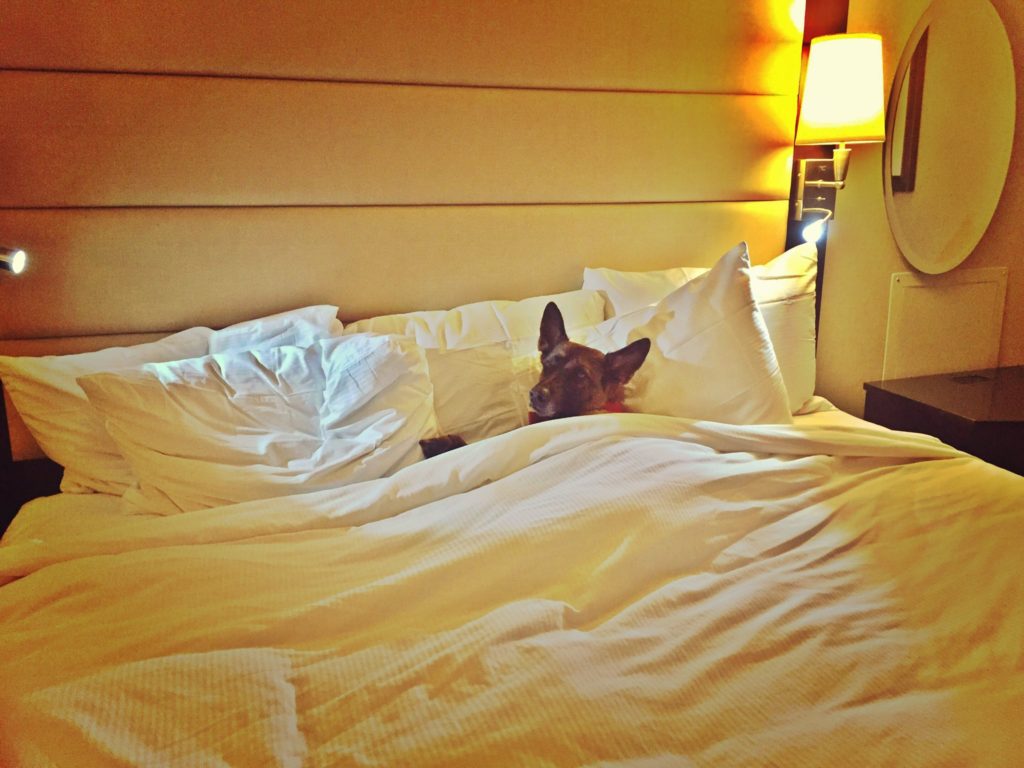 He is given treats throughout the course of the day just for looking cute, and if he wants to go outside, he simply scratches at the door, asking his owner to stop what she is doing to let him out….and she does…consistently.

On the other hand, let’s look at a “poor” dog who is fed two square meals a day. He stays in a kennel run and comes out for training once per day as his handler’s schedule permits. He has no toys. He has no social interaction. He has his run. And his daily training session.

Now let’s look at a “working middle class” dog. This dog has a job to do – be it simple basic obedience or high level work for real life or competitive applications. He works for his “paycheck” and is expected to perform in exchange for a series of compensation plans – food, toys, treats, etc.

Which dog, the “rich” or the “poor”, would make a better working middle class citizen? Which dog would have more drive to work for food and toys? The one who always has them available? Or the one who rarely gets them?

I’ll give you a hint, if you chose the “Veruca Salt” dog, you may have chosen wrong.

Now don’t get me wrong. I’m not telling you that the key to unlocking your relationship with your dog is to starve him, lock him in a kennel, and never pay him any attention…to take away his toys and keep him one step up from homeless.

But I am asking you to take a look at the distinctions between rich dogs and poor dogs and understand who would fare better in the metaphorical working middle class.

Here’s the story. I can’t expect my dog to work for things he has readily available unless his drive for those things is so naturally off the charts, it trumps the fact that he’s over spoiled. You might get a little bit of work in here and there, but the dog who wants for nothing, very plainly stated, wants for nothing! He doesn’t have a desire to earn a paycheck, because he already has more money than he knows what to do with!

As with any area of dog training, there are some trainers out there that take this concept to the extreme, and there are others who won’t have anything to do with it, because, plainly stated, those extremists have left a bad taste in their mouths. Sure, there are trainers that withhold food for days to make a dog with lower food drive work for food, effectively starving them to get them to eat. And there are others that go so far as to withhold water so they can use a refreshing drink as a reward for a job well done.

I am in no way encouraging you to do that….ever! I’m simply saying, those rewards you want to use in training should be reserved for training and shouldn’t be given out for no good reason at all.

My working dogs are middle class citizens. My Basset Hound is a rich kid, totally spoiled rotten. She would likely find herself ending up with the Oompa Loompas, after over indulging and breaking the rules. She is a princess. Sue me.

But my working dogs start out their journey with me as minimum wage workers. They don’t have a ton of luxuries because they haven’t yet earned them. They get their meals, a roof over their heads, a comfortable bed to sleep on, and attention and affection. They then earn their luxuries as they work for them, climbing the ladder to better paying positions.

When my dogs are working consistently, they are paid, and they are paid well. They earn awesome rewards, and receive them often. And as they climb the “corporate ladder”, their lifestyle reflects their hard work.

All of my dogs retire rich.

I create a work ethic by teaching my dogs to work for what they want. I don’t starve them. I don’t withhold necessities, I just make them earn the things in their lives that have value to them….which makes them even more valuable.

Do you have a rich dog?

If you’re reading along and have realized your dog may be a little too rich to be a successful working class citizen, there are some things you can do to improve work ethic and better motivate your pup for his rewards.

In dog training, as in life, there are the rich, the poor, and the working middle class. Where your dog lies on the spectrum is specific to you and your daily routine. But a rich dog will always be less motivated to work for rewards he has readily available to him, unless of course his drive is genetically so over the top for those rewards that it trumps the fact that he may be a bit spoiled.

A poorer dog holds value in the things he earns more than his rich dog counterpart, so if our goal is a motivated working middle class dog, it’s important we get strategic about our paychecks, only issuing them when earned, and not confusing them for the childhood allowance – a check that is promised without much effort gone into earning it.

My dogs work for their meals – it’s the easiest, least expensive treat to use, and it doesn’t run the risk of causing as much intestinal upset as some of the widely marketed treats when given in large quantities. I don’t use fancy treats as a reward for simply existing, simply looking cute. Instead, my “fancy” or high value treats are given strategically and only when earned. Toys are the same. My dogs don’t have an entire toy bucket laying around, available for them peruse at their leisure. They have a couple of tough toys for play in their runs, but otherwise, they earn their toy play through structured training. Because of that, those games and toys hold higher value. And my dogs don’t get endless amounts of affection and attention. They spend time on their own… time away from me…time being independent. They learn to be comfortable being on their own, and they learn to value their time with me. And most importantly, they learn not to be pushy or demanding for attention or affection – they learn how to earn it through productive and positive behaviors. They have boundaries. And while I’ll for sure say that they are spoiled, I spoil them in ways that are productive to our training goals.

Think back to the childhood lessons we learned from Willy Wonka and his Chocolate Factory. There are consequences to over-spoiling our dogs, making them a metaphorical “rich dog”, especially if our goal is to have a productive member of the working middle class. It’s okay for our dogs to earn good paychecks, to be paid often and to be paid well. But if they aren’t required to earn those checks, motivating them for their work can get tricky.

Don’t let your dog end up in a garbage chute, blowing up like a blueberry, or falling into a vat of gluttony. You don’t have to make them the poorest kid on the block, like little Charlie Bucket, who rarely could afford a meal, but by making them earn their paychecks, you’ll keep motivation high and their work ethic strong.