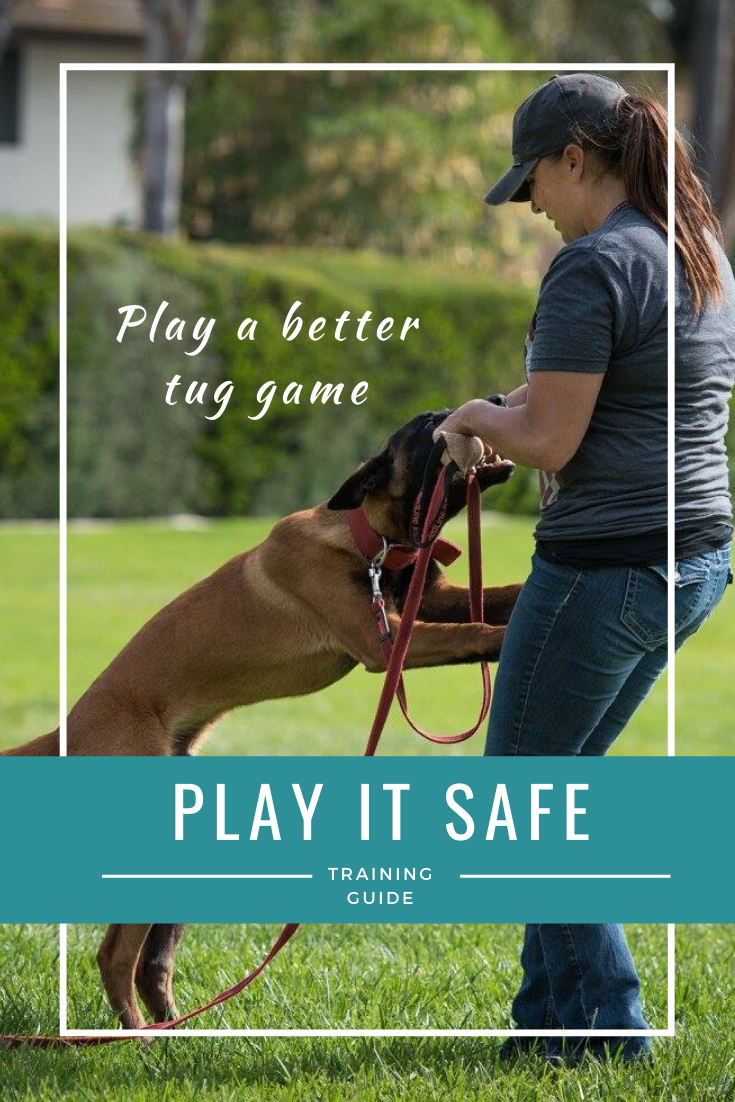 Are You Playing It Safe?

Get our free guide and learn how to play a safer, more empowering game of tug.

She stood in front of me holding a leather lead. The dog at the other end lay quietly but alert at her side. As the dog scanned the park, fixating on any and every movement and occasionally barking at a passerby, the woman explained her plight.

As she spoke, describing to me her dog’s engagement issues (which regularly plague handlers both in the working dog and pet dog community), the dog struggled to maintain his position. He fidgeted, and rarely did his ears falter from their rigid upright position. When they did, they shifted direction, pointing at me like a radar, telling me he was more intrigued by everything going on around him than he was by his handler.

The owner was doing everything right according to all of the training books. She had a working Malinois, and she was… well… working him. She had aligned herself with a number of sport clubs, had started him in bitework, and began obedience training when the dog was young. There was no doubt the dog knew commands, as evidenced by the fact that he maintained his down the entire time we spoke. But it was the engagement that was lacking. This particular dog held his down because he had to – because the consequences for breaking the command far outweighed the rewards in front of him…

But that dynamic would inevitably shift the moment the reward’s value peaked. It could be a skateboard passing too closely, or perhaps it would be an off leash dog that bounded over to say hello. From what I saw in our first meeting, it was hard to say exactly what environmental stimuli would be just too exciting for him to maintain his composure. But one thing was obvious; it was only a matter of time before he broke.

I watched his wheels spinning. He was smart, and he was weighing his decisions. He could predict the punishment he would receive if he faltered, but he weighed his options – not only whether the risk outweighed the reward, but also the probability of the negative consequences altogether. He was laying down because he had to. NOT because he wanted to. And the entire time, his attention was elsewhere.

After hearing her story, we got to work. But instead of focusing on cleaning up her obedience – those commands she had worked so hard to teach…those commands she was having trouble maintaining when distractions were high – we instead focused on simple play.

Is your game play helping or hurting?

Playing with your dog is a fundamental skill at the core of maximizing engagement. Whether you use games and toys as rewards in your training, are training a competitive dog for obedience, agility, or protection sports, or whether you simply want to better your relationship with your dog, learning how to play properly can be a defining factor in leading your dog to a new level of engagement.

Most people think game play with their dog is pretty straightforward. In fact, many people maintain a very superficial view of the concept. When using toys as rewards in training, many people simply mark the good behavior and then reward the dog with its favorite toy or game. Perhaps they throw a toy for their dog to retrieve. Perhaps they like to play tug. Perhaps they have a playful, prey driven dog and want to build engagement with strategic play.

While game play seems natural, and something few give much thought to, believe it or not, a vast majority of dog owners are actually doing it wrong.

(1) Pushing the toy into the dog’s face – When dog owners present with engagement issues, and are subsequently asked to demonstrate their reward games, a majority can be found pushing the toy into the dog’s face the moment he disengages. The scenario looks like this: The dog is engaging and playing with the toy and then becomes distracted. To get the dog to re-engage, the owner shows them the toy, thrusting it into their face (or pushing it into their mouth) to ensure that the dog knows they have it and to remind them of all the fun they are missing out on.

This technique is somewhat instinctive for dog owners who don’t fully understand the mechanics of play, the underlying principles behind the games, and why dogs play the way they do. And, unfortunately, it is completely counterproductive. Not only does pushing the toy into your dog’s face cause the toy to lose value (If I can have it whenever, even when I disengage, why would it hold value?), but it also defeats the underlying drives behind the games we play with our dogs.

In fact, good play is rooted in a dog’s natural prey drive. This instinctual drive is seen in varying degrees in our canine counterparts, and it is the core reason our dogs play with toys. Games of tug and retrieve are rooted in the drive to chase, catch, and kill prey. But when was the last time you saw a rabbit thrust itself into a coyote’s mouth? It would never happen.

Plainly stated, the act of shoving the toy into the dog’s mouth contradicts their natural instincts, making the game confusing and rather uncomfortable. Instead of forcing the toy on your dog, if your dog loses engagement, MOVE. Run, play keep away, and activate his prey drive. Let him see all of the fun YOU are having with HIS toy that he gave up when he lost focus, and you can bet he will re-engage much more effectively.

(2) Winning – With some dogs, it can be easy to win the toy. But don’t. The same logic that steers us to lose a game of checkers to a young child applies here. If we always win, the dog will think it doesn’t stand a chance. And if the dog always loses, he won’t want to play.

One of the biggest mistakes dog owners make when playing with their dog is always winning the game or succeeding in snatching away their dog’s toy. For a dog who is perhaps a bit selfish or isn’t a natural retriever, taking the ball away to throw it again can look like a punishment. The dog did all of that work to bring you something, and all you did was take it and throw it. If it were me, I’d tell you to go get it yourself! Same goes for a good game of tug. If you are always besting your dog with your strength, your dog will eventually give up.

Instead, build confidence by letting your dog win. Pet and praise your dog after he does. Encourage him to bring the toy back to you, but don’t instantly try to take it, else you risk forming a negative association for the dog.

(3) Outlasting the dog – Many dog owners will play until their dog loses interest. But since the goal is to maximize engagement and to build your dog’s desire for play, quitting when your dog decides he’s had enough will work against you. Instead, leave your dog always wanting more. If your dog is burned out on play, they will be less enthusiastic to engage the next time around. But if you end on a high note, with your dog begging for more, their engagement and desire to play will grow exponentially.

For the prey driven dog who likes toys, strategic game play can be the key to unlocking levels of engagement you never knew were possible. Getting it right can mean the difference between the dog who wants to work and the dog who is forced to work.

11 replies to "The Art of Play: 3 Things You Might Be Doing Wrong"